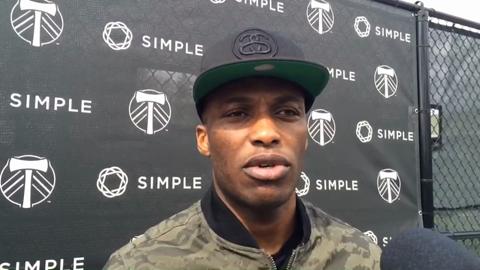 ?He?s a guy who can come in and provide depth,? Porter said after Yartey?s signing. ?Who knows, maybe he?ll push some of the first 11 guys, and if not he?ll be a good piece off the bench.?

Through Portland?s first three games, Porter?s 4-2-3-1 formation left Gaston Fernandez and Maximiliano Urruti as the only substitutes along the front four.

Porter said Yartey has the ability to play on the left or right and is more of a one-v-one player than the more penetrating wingers Rodney Wallace, Darlington Nagbe and Asprilla.

?He?s more of a one-v-one player, so he?s a little bit different than let?s say a Rodney or a Nagbe, when he plays wide, or even an Asprilla,? Porter said.

?He?s slightly different in that he likes to get on the ball and go one-v-one. He?s left-footed, but he?s capable of playing on the right or left.?

Yartey said his game is all about finding the back of the net, whether he?s scoring the goals or acting as a facilitator.

He had his best offensive season with Swiss Super League club Servette FC, on loan from Portugal?s Benfica in 2011-12, when he scored eight goals in 31 starts.

?I like to exploit the spaces behind the defenders, and also I like to take on defenders in one-v-one situations,? Yartey told media following Tuesday?s training session at the team facility. ?I love to score goals and also create goals.?

The 25-year-old joins the Timbers on loan with a transfer option from Swiss Super League side FC Sion, and said he has heard nothing but good things about the team and its passionate fan base.

He arrived in the Rose City late last week, in time to take in Portland?s 3-1 win Saturday over FC Dallas as a spectator at Providence Park.

?[Porter] spoke very well of me and told me how the team plays and how he would like me to play,? Yartey said. ?And basically I was very happy with the way he spoke to me.?