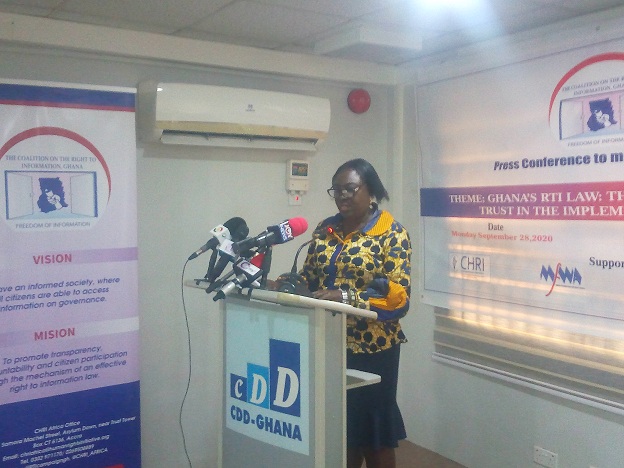 The Coalition registered their displeasure as the world marks the 2020 International Day for Universal Access to Information (IDUAI) being observed around the globe.

Here in Ghana, members of the RTI Coalition have chosen the theme “Ghana’s Right to Information Law: The need to build public trust in the implementation process.”

According to the Coalition, their theme is on the back of sluggish implementation of the Right to Information Act 2019 so far, following the coming into effect of the Act in January this year 2020.

“In addition to this, are the largely tokenistic commitments made by the two major political parties in their respective manifestoes as our nation heads to the polls on December 7,” the Coalition disclosed.

The United Nations (UN) at its 74th General Assembly held in October last year proclaimed on 28th September as the International Day for Universal Access to Information (IDUAI).

This endorsed at the UN level, the earlier proclamation by the UNESCO General Conference in 2015 following the adoption of the 38 C/Resolution 57, in recognition of the significance of access to information to the people of the world.

Addressing the media to mark the day, at the Centre for Democratic Development (CDD) – Ghana, conference room in Accra today, the Vice Chair Person for the Coalition, Mina Mensah stated that the Coalition was with great hope when President Akufo Addo assented the Act in May last year.

She, however, said the Coalition now is with great disappointment as almost all key observations and recommendations to the government are yet to be responded to.

“It is instructive to note that the Ministry of Information which is the Government Agency assigned to lead this initial implementation process has not responded to this request for information from us. This, in our considered opinion is not the kind of leadership that should be shown by the Ministry championing access to information,” she added.

The National Democratic Congress (NDC) was not spared, as it came up that the Coalition was not consulted during the drafting of its much touted People’s Manifesto that was launched recently.

“More disappointing is the nearly absent indications in the manifestos of the opposition National Democratic Congress (NDC) on the issue of RTI. Under the section titled ‘Freedom of the Media’ in their manifesto, they provide a one-liner that reads “continue the implementation of the Right to Information Act 2019,” the Coalition opined.

They pointed out that the posture by the NDC shows their inadequate indication of their commitment to the RTI.