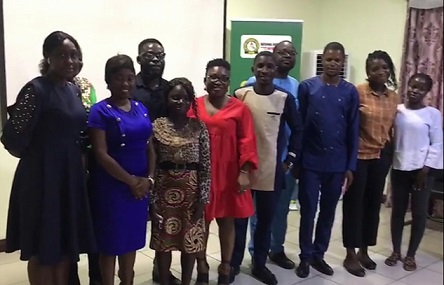 A group calling itself the Coalition of Concerned Journalists and Social Activists (COCJASAARC) on Monday November 22, 2021 paid a courtesy call on the National Road Safety Authority to brief them on their activities and how both organizations can collaborate effectively to help reduce road crashes in the country.

The group led by a seven-member delegation comprising its executives were given a rousing welcome by a waiting team of top officials at the National Road Safety Authority (NRSA) upon a visit to their office located at Ridge in Accra.

Mr. Joseph Wemakor, the COCJASAARC’s Co-convener who briefed the gathering first introduced the group and further proceeded to outline its activities in detail to the officials of the NRSA.

He observed that the group is on the mission to embark on a campaign with the aim of raising public awareness on road safety in a bid to help lessen the incidence of road crashes including the fatalities, injuries and other challenges that comes with it to the barest minimum.

He added that the group, having been alarmed by the outcome of events in the wake of numerous road crashes which has claimed several lives in recent times believes the government is handicapped in dealing with the situation hence the need to come on board with the National Road Safety Authority and strongly back its efforts in achieving results.

Mr. Wemakor himself who had been a victim of a gory road accident which he narrowly escaped by the grace of God this year, recounting his traumatic experience remarked that: “I derive my passion to lead this campaign to a successful end on the basis that I myself have been a victim and equally shared in the plight of all Ghanaians who happened to be victims as well”.

The Director of Planning and Programs at the National Road Safety Authority, Ing. David Osafo Adonteng who in turn addressed the COCJASAARC membership on behalf of his team commended the group’s effort to support its outfit in a bid to realize its objectives.

According to him, it was a great surprise for him to see a group of young journalists and social activists coming together for the first time with so much verve to champion a cause which others have deserted due to failure while in the process of delivery.

He equally used the occasion to announce its outfit’s newly launched road safety campaign dubbed: “Stay Alive” to the group, stressing, “that’s what we’re going to go with for the next three (3) years”.

While touting the project as one which is founded on the National Framework, he quickly urges the Coalition to support it and ensure their upcoming campaign equally fits into it, insisting that, “every campaign from anywhere would have to be built into it”.

“So we are not going to allow any campaign to run parallel without falling into the framework”, he hinted, adding: “Because we need to regulate what everybody does”.

Touching on the dos’ and don’ts of a successful road safety campaign, Mr. Adonteng recounted an instance where the Authority had expressed disgust about the activities of some campaigners who engaged the public with the wrong information.

“There were times, anywhere you get to you’ll hear somebody saying I am doing a road safety campaign and we didn’t know them. Some were using all sorts of words”, for example: If you speed or overspeed, you’re a fool”.

In his estimation, the content of their message was in a complete bad taste for public consumption and warned the group against dissemination of such ‘unsavory messages’ to the public particularly to motorists and road users.

For her part, Head of Corporate Affairs of the National Road Safety Authority, Pearl Adusu encouraged members of the Coalition to exude confidence in the face of any challenges that may arise during the course of their campaign period and be highly committed to task towards realization of desired objectives.

Coalition of Concerned Journalists and Social Activists (COCJASAARC) as the name implies is a network of over 60 media and civil society organizations made up of journalists and social activists who are committed to ensuring safety on our roads.

The campaign dubbed: ‘Stop road crashes, save lives’ is aimed at raising awareness on road safety, and instilling a culture of discipline among road users before, during and after the yuletide season in an attempt to lessen incidence of road traffic crashes, fatalities and injuries on our roads so as to remain safe.

It would witness the campaigners vigorously engage road users and the general public at major lorry stations/parks, market places and religious settings located within three regions; namely the Greater Accra, Central Ashanti and the Northern Regions of Ghana where they would be vigorously sensitized and presented with educational materials on road safety regulations to help create deeper education and awareness on road safety which would yield a positive result.

“As media practitioners, our agenda setting role is key in determining the success of this project to a large extent coupled with the aggressive utilisation of social media as a tool to facilitate our campaign messages to reach out to our widest audiences as possible with the good news”, the group’s Convener Samuel Adobah has said.

NRSA Identified Human Errors As Leading Cause Of Road Crashes