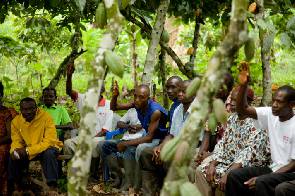 The seedlings which have high yields and are resistant to diseases are to replace aged cocoa trees on the farm.

He said this when he was speaking at the Subin Camp in the Adansi south district of the Ashanti region.

President Mahama said the cocoa replacement exercise is very important and must be taken seriously because it the mainstay of the economy and also one of the highest foreign exchange earners for the country.

?Although Ghana is only the world?s second highest producer of cocoa, it has refreshingly maintained its position as producer of the highest quality cocoa beans globally.?

He assured cocoa farmers that no effort will be spared to support them improve their yields. He also gave the assurance that the 5 kilometers of new Edubiase road will be tarred to facilitate the movement of foodstuffs from the rural areas to marketing centers.

President Mahama attributed the reduction in cocoa production to some corrupt practices in the sector and said government will punish people engaged in the practice.

Nana Okofo Subin Kan II, Dompoasehene, commended government for the construction of the cocoa roads saying the crops remain the mainstay of most people in the district.

Do not deny your children education – Adutwum urges farmers

Farmers must be appreciated and supported-2020 National Best Farmer

We congratulate our gallant farmers