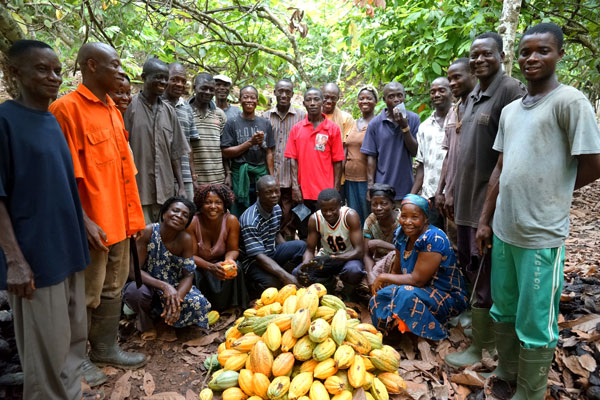 strong>Cocoa farmers have been encouraged to patronise the services of the Produce Buying Company (PBC) to benefit from the new pension scheme instituted by the Government.

Madam Andrea Franz, the PBC Central Regional Human Resource Manager, said the only means to sustain the Company was for the farmers to continually patronise its services.

She made the call in an interview with the Ghana News Agency (GNA) at Swedru in the Central Region in her New Year message to cocoa farmers.

Madam Franz said the PBC, with almost 80 per cent shares by government, had put in place comprehensive mechanisms that would cater well for the welfare of cocoa farmers.

She stated that the farmers could enjoy the Pension Scheme instituted by the Government if they continued to sell their cocoa beans to the PBC, which had a track record of trustworthiness in the industry.

Madam Franz indicated that the Company was directly under the Ghana Cocoa Board (COCOBOD) and had quality administrative plans, which would go a long way to ensure better living conditions for farmers.

She warned that if cocoa farmers allowed foreign companies to bait them to sell their produce to them it would affect growth of the state owned company.

She said it was regrettable that some cocoa farmers allowed some Licensed Buying Companies (LBCs) to sell fresh cocoa beans to them at lesser costs, a practice, she indicated, that could affect the quality of Ghana Cocoa on the world market.

“Ghana’s cocoa is classified as one of the best among all cocoa producing countries in the world and it is vital to maintain the quality to meet international standards,” she said.

Madam Franz appealed to the farmers to exercise restraint as they would receive every package planed for them in the 2020 cocoa season.

She gave the assurance that the PBC would continue to pursue policies and programmes to their benefit to ensure the country met the one million tonnes target it had set for 2020.