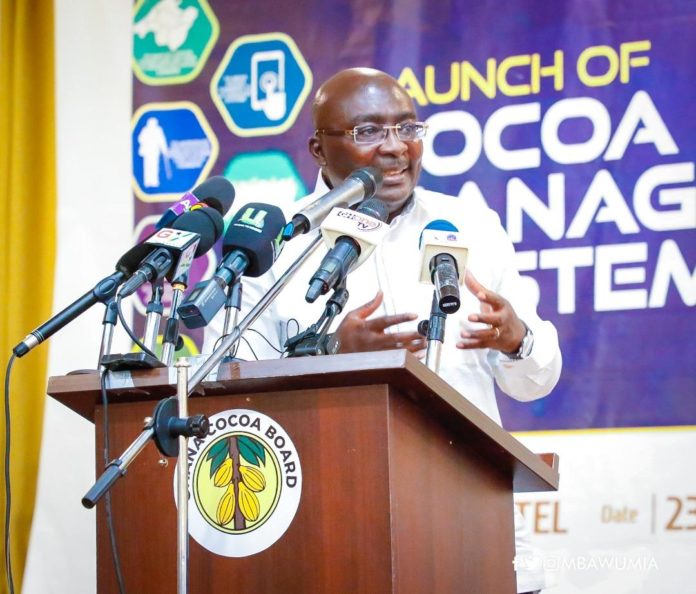 Vice President Dr Mahamudu Bawumia says the launch of the Cocoa Management System (CMS) will play a significant role in the implementation and efficient management of the soon to be launched Cocoa Farmers’ Pension Scheme.

The CMS is an online portal, which will capture the database of cocoa farmers digitally, and was launched by Vice President Bawumia, October 23 in Accra.

It will also play a significant role in the efficient implementation of the Cocoa Farmers’ Pension Scheme.

Speaking at the launch, Vice President Bawumia said the technological innovation is a game-changer, which will transform the cocoa sector in the country, and immensely benefit cocoa farmers as the government was set to launch the Scheme, but will require accurate data from cocoa farmers.

Dr Bawumia stated that the CMS was in line with the Government’s digitisation agenda to operationalise many government institutions.

“The CMS is not only in line with government’s digital transformation agenda, but would also bring enormous benefits to stakeholders in the cocoa industry,especially farmers, Dr. Bawumia said.

“At the click of a button, the CMS system can show all the needed information in real time. This is a seamless technology platform that will help COCOBOD manage the cocoa industry.

“For the first time, every programme, policy intervention, plan and projection and infrastructural development needed in cocoa growing areas will be based on verified data. Certainly no more cocoa roads in Accra. The CMS will reject such intervention.

“Imagine what this platform will do in compiling census of farmers once we start the Cocoa Farmers Pension Scheme. We will know the cocoa farmers, their census, their demographics and their output and how to help build up their pension scheme.”

The Vice President said, the technological innovation in the cocoa sector, coupled with other digitization of other government agencies, demonstrate government’s quest to digitise the Ghanaian economy and bring more efficiency and transparency in both the private and public sectors.

“I wish to emphasize that Government is committed to building a cash-lite economy through an inclusive digital payments ecosystem.”

“Our overarching objectives in this digitization agenda are to improve both economic and public sector governance, improve transparency and accountability, improve domestic revenue mobilization and curb corruption,” Dr Bawumia said.

He stressed that government would quickly transform the Ghanaian society by leveraging on technological innovations as a means to develop civic database of all Ghanaians as it was impossible to govern a modern society “when we don’t know who are the citizens.

Vice President Bawumia congratulated COCOBOD for the innovation and urged other government agencies to take a cue from COCOBOD and strive to digitize their operations in line with government’s vision.