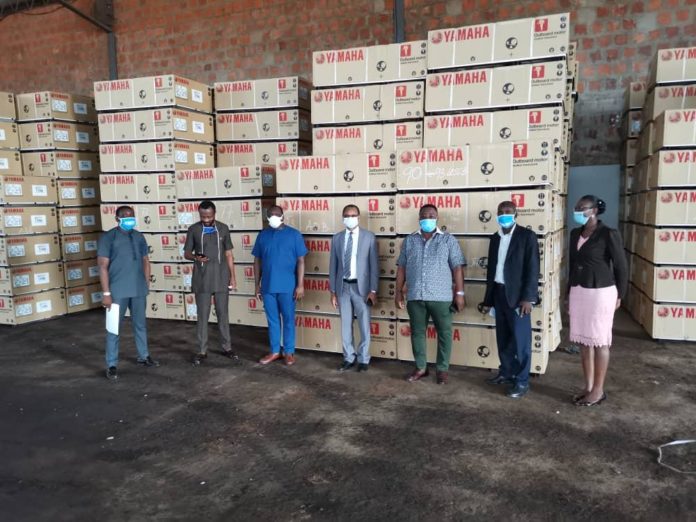 The move formed part of a grand strategy by government to distribute highly subsidized outboard motors as part of efforts to give strong boost to the fishing industry.

Mr Jerry Ahmed Shaib, the Chief Executive Officer, said this in an interview with the media after he and officials from the Agricultural Development Bank (ADB) inspected the items at the premises of Japan Motors at Tema.

He explained that under the terms of CODA, a 40 horsepower Yamaha outboard motor, which currently sells at GHS18,376.00 will be offered to beneficiaries at GHS10,000 as directed by the President.

That represents a reduction of 45.6 percent compared to market prices.

Also, CODA had procured 5,000 outboard motors to be distributed in line with the vision of President Nana Addo Dankwa Akufo-Addo to implement pro-poor social intervention programs through the Infrastructure for Poverty Eradication Programme (IPEP) of which CODA is an implementing Authority.

Among others, he announced that CODA was undertaking a variety of projects in 109 constituencies in six regions to accelerate economic and social development through the Ministry of Special Development Initiatives.

On the mode of distribution, the CODA CEO indicated that some poor fishers who were struggling to maintain their livelihoods due to myriad of factors will benefit.

To ensure that the right beneficiaries received the support, CODA earlier embarked on sensitization exercise in all major fishing locations within the CDZ to inform, educate and explain the modalities to the fisherfolks.

Additionally, CODA constituted committees at all landing locations to scrutinize, shortlist and recommend potential beneficiaries based on the agreed criteria to ensure that those in the greatest and most urgent need receive the outboard motors.

Each committee comprised of representatives of CODA, Ministry of Fisheries and Aquaculture Development (MOFAD), Regional Minister and the relevant Metropolitan, Municipal and District Assemblies, Landing Beach Committees and Association of Canoe Owners.

The CODA Director assured that they were determined to ensure transparency, accountability and equity in the distribution of the outboard motors.