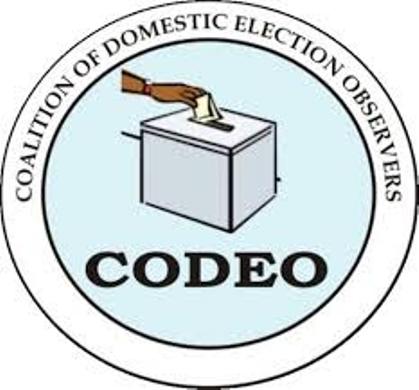 The Coalition of Domestic Election Observers (CODEO), has release its second pre-election observation report capturing key remarks of the pre-election environment during October 2020, ahead of the December 7 polls.

The report, which was made available to the Ghana News Agency by Mr Albert Arhin, National Coordinator, CODEO, is based on weekly reports filed by 65 Long-Term Observers (LTOs) deployed across 65 selected constituencies throughout the country.

The observers have been monitoring the general electoral and political environment including; the activities of key election stakeholders such as the Electoral Commission (EC), the National Commission for Civic Education (NCCE), political parties, the security agencies, Civil Society Organizations (CSOs), and religious and traditional leaders.

Summary of findings of the report are similar to CODEO’s observations in the month of September 2020, with civic and voter education activities being generally low across the various constituencies.

The report said there was still, generally low visibility of election support activities by CSOs, particularly those aimed at peace promotion.

It said COVID-19 health and safety protocols were not adhered to during some political party activities and the National Democratic Congress (NDC) and the New Patriotic Party (NPP) remained the most visible political parties in the constituencies observed in terms of political and campaign-related activities.

The main findings stated that observer reports showed intensified preparatory activities by the EC towards the December 7, 2020 elections. Activities observed to have been undertaken by the EC include; the exhibition of the voter register at district offices of the EC (for participants in the extended voter registration exercise one), recruitment/training of election staff, nomination of candidates, and transfer of votes/receipt of applications for proxy voting.

It said during the votes transfer exercise, which was carried out by the Commission from October 20-23, observer reports showed a generally peaceful exercise across the constituencies observed.

It said however, there were a few cases of disturbances at some centers during the exercise. For instance, there was tension between party agents at the Builsa South constituency in the Upper East region over claims that some students who applied to transfer their votes to the constituency did not qualify to do so.

It said Civic/Voter Education Platforms/Modes, Actors and Targeted Audience Observer reports showed a marginal increase in civic and voter education activities in the observed constituencies, compared to what was observed in the month of September.

It said the NCCE and the EC remained the leading institutions undertaking civic and voter education activities in the constituencies observed, followed by political parties and religious bodies.

Few civic/voter education and other election-related activities (such as peace promotion) by CSOs were noted in the constituencies observed.

Regarding campaigning activities by political parties, the report said the NDC and the NPP intensified their campaign activities, such as rallies and party marches, over the period.

It said at campaign activities observed, the main policy issues that were raised or discussed particularly by the NPP and the NDC were education, unemployment and the economy.

It noted that there was little visibility of campaigning activities by the other political parties. The report said while observer reports indicated a generally-peaceful electoral environment during the period under review, there were a few reported incidents of the use of abusive or inflammatory language, destruction or removal of party/candidate paraphernalia, and election-related violence.

The report said for instance, there was a violent clash between supporters of the NDC and the NPP at the district office of the EC in the Pru West Constituency of the Bono East region during the voter transfer exercise by the EC.

It said the clash allegedly resulted in the injury of five people. In another incident on October 5, at Adjaraja Beposo in the same Constituency (Pru West), some supporters of the NPP allegedly prevented the NDC from having a campaign activity in the town.

The report said that resulted in a clash between the supporters of the two parties, leaving some wounded.
It said on Sunday October 25, it was alleged that, a courtesy call on some chiefs and elders in the Banda constituency by the Banda NPP parliamentary candidate was hindered by some youth in Banda Ahenkro in the Bono region.

The report said in reaction to the incident, some youth believed to be affiliated with the NPP allegedly vowed not to allow the NDC to campaign in areas believed to be the stronghold of NPP in the Banda Constituency.

It said at the Odododiodio Constituency in the Greater Accra Region, scores of persons were reported to have suffered varying degrees of injuries after a clash between supporters of the NDC and the NPP.

With respect to COVID-19 health and safety protocols, CODEO observer reports indicated that a few people adhered to the social distancing protocols and wore face masks during campaign activities and other activities by stakeholders.

It said for instance, a rally organized on October 7, in Ahomahomasu in the Fanteakwa North Constituency of the Eastern Region to welcome the vice-presidential aspirant of the NDC was crowded with party supporters flouting the required social distancing protocol.

It said during the voter transfer exercise at the Akwatia district office of the EC, social distancing was not observed among some applicants, and only a few reportedly wore face masks.
The report said CODEO once again condemned all reported acts of violence, which took place during the period of observation.

It called on the Inspector-General of Police (IGP) to take swift action against all perpetrators of such violent conduct.

The report asked all political parties, party supporters, the EC and all stakeholders to be mindful of the risks posed by the COVID-19 and ensure adherence to all relevant health and safety protocols to prevent the spread of the virus.

It entreated CSOs and all stakeholders, including; faith-based organizations, to intensify election support activities particularly in support of peace promotion in respect of the elections.

The report said CODEO would continue to observe the pre-election environment and share its findings with the public.

It said CODEO’s long-term observation is made possible with the support of the American people through the United States Agency for International Development (USAID).