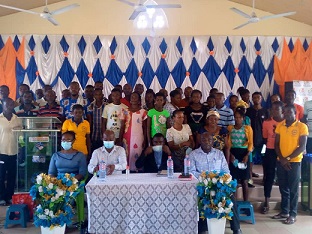 The National Commission for Civic Education (NCCE) has called for collective action to counter threats of youth extremism, vigilantism and terrorism.

The Commission said violent extremism threatened the peace and stability of nations with protracted conflicts and violence, not to mention the heartless killings, displacement of people, and destruction of property, which eventually exacerbated tension.

The programme, sponsored by the National Security, sought to educate the public, particularly the youth, on the devastating impacts of secessionism and violent extremism to prevent such activities and its dire consequences on national development.

It aims at fighting organised crime, promote respect for human rights and rule of law by equipping the youth with relevant information on violent extremism and radicalism and to guard them from being recruited to cause violence.

The engagement was therefore to augment participants’ understanding on peace building and enhance their knowledge on community-based mechanisms for countering violent extremism.

Threats to national cohesion, Alhaji Mohammed said, was not only caused by the unguided desire of leaders to attain political office, but by citizens who failed to respect the rights of others.

Such practices, in most cases, led to vices, which threatened the sovereignty of the State and jeopardised national unity, he said.

Alhaji Mohammed noted that peace was an integral part of nation building as development only thrived in the midst of unity while violence set the clock of progress backwards.

“Let’s choose to live peacefully because when peace prevails, development is assured. Let us all be duty bearers in ensuring that there is peace in all situations,” he said.

Alhaji Mohammed called for intensified education on religious and political tolerance urging all democratic institutions to whip up citizen’s awareness on the need to refrain from the abuse of their rights and freedoms.

He took participants through the National Framework for Countering Violent Extremism and Terrorism, mentioning marginalisation, youth unemployment, inequality, discrimination, investments, fear and panic, and denial of rights and civil liberties as some of the causes.

Other pushing factors that fuel violent extremism, include; environmental and socio-economic grievances, Alhaji Mohammed said, and called for transparent leadership, positive character and payment of taxes for national growth.

Mrs Judith Adomako-Ofosu, the Municipal Director of NCCE, said the engagement was necessary to enable the youth to identify the warning signals of violent extremism and serve as community ambassadors for easy identification of suspicious characters.

She urged all groupings, particularly religious entities, to prioritise the security of their members.

Mrs Adomako-Ofosu said though Ghana had not witnessed major terrorist activity, there signs were becoming more visible and entreated the public to volunteer information to the security agencies to counter terrorist activities.

She urged all to help promote good governance, disassociate from bad companies and assist in gathering information to enforce security.