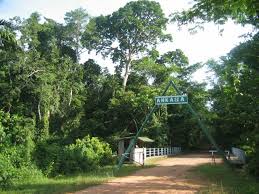 HIDDEN TREASURES OF THE GOLD COAST

?A LOOK AT GHANA?S UNTAPPED RESOURCES

?It is always sad to leave a place to which one knows one will never return. Such are the melancholies du voyage: perhaps they are one of the most rewarding things about traveling.?

? Gustave Flaubert, Flaubert in Egypt: A Sensibility on Tour

This week, Hidden Treasures visits the Western region of Ghana and brings you to the Ankasa nature reserve, one of the wet evergreen protected areas in Ghana in an almost unspoiled state.

This reserve derives its name from a folktale that admonishes people to be ?silent? around the river area of the reserve.

Hidden Treasures also brings you a ?visitor account? section that gives you a vivid feel of the attraction even before you make the trip. Come along and enjoy the serene atmosphere that nature presents.

The Ankasa Conservation Area is an area in southwestern Ghana, in Ghana?s Western Region, about 365 kilometers west of Accra, near the border with C?te d?Ivoire. It incorporates the Nini Suhien National Park and the Ankasa Resource Reserve.

Covering 509 square kilometres, this Protected Area falls within an ancient rainforest and is the most bio diverse in Ghana. It represents the only wet evergreen protected area in almost unspoiled state. It is home to over 800 plant species, including some endemic ones like the recently discovered Psychotria.

The Ankasa, Nini, and Suhien Rivers all pass through the park, and are known for their rapids and waterfalls.

Ankasa Conservation Area became a protected area in 1934. The people living in the fringe communities belong to the Nzema ethnic group and are mostly peasant farmers, mainly cultivating cassava and cocoa.

There are many medicinal plants within the conservation area, including sugarplum and mahogany.

The Ankasa Conservation Area is divided into two by the Suhien River. The Nini River constitutes the northern border of the conservation area.

The word ?Ankasa? means ?don?t talk?. It is said that long ago, the area around the Ankasa River was inhabited by hostile dwarves who kidnapped strangers and threw them into the river. To prevent kidnappings, people were advised to keep quiet as they approached the river. Hence the name ?Ankasa?.

The forest still holds viable populations of large and charismatic mammals, such as the Forest Elephant, Bongo, Leopard, and Yellow-backed Duiker. Primates are represented with six confirmed and 3 unconfirmed species, including Western Chimpanzee and 3 rare or endangered subspecies endemic to C?te d?Ivoire and Ghana. These are the Roloway Diana Monkey, Geoffroy?s Pied Colobus and White-naped Sooty Mangabey.

The area has an impressive bird list of over 200 species, the majority of these being truly forest dependent. Several rare birds endemic to the Upper Guinea Forest like the White-breasted Guinea Fowl (Agelastes meleagrides), Yellow-throated Olive Greenbul and Rufous-winged Illadopsis are found in the area.

The extensive network of smaller streams, together with the 3 main rivers of the protected area similarly supports a variety of reptiles including the Broad-fronted Crocodile.

Over 600 butterfly species with many endemic species have been recorded, and the network of streams in the area is an important breeding ground for many of the fish species in the region as well as being of an important watershed for the rivers west and south of the protected area.

With many yet-to-be discovered plants and animal species, Ankasa offers a virgin laboratory for scientists and students. Its quiet milieu is equally conducive for religious and recreational tourism.

The visitor information centre is located some 100 metres from the main gate. Staff are in place to provide necessary information to visitors.

Although over 10km of the park is motorable, it is best enjoyed through guided walks. Five tourist trails enable the visitors to feel the rain forest. Although forest animals are difficult to see (because of the closed vegetation), visitors can hear calls from many species, especially monkeys who can sometimes be seen jumping from tree to tree in the canopy.

The spectacular Bamboo Cathedral is located at Nkwanta, about 8km from the Ankasa gate of the Park. Though not a church building and has no human Bishop, a priest nor a creed, the site showcases nature?s perfect architectural design. The Bamboo Cathedral has become a very popular site for visitors. This site offers a quite environment for visitors.

The Ankasa rainforest serves as shed for many streams and rivers. Three of them from which the forest derives its name are the Ankasa, Nini and Suhien. The fascinating characteristics of these rivers are the rapids found on them. The breezes along the rivers and rattling noise of the rapids are a delight to tourists. The potential for canoeing is being explored.

The ?Big Tree? (Tieghemella) is one of the tallest trees in Ankasa forest. Towering well over 20 metres, this tree offers a unique opportunity to see what a good rainforest can have as trees. This species is commonly used by forest elephants to scratch their thick skin and visitors might be changed to see recent signs of elephant scratch or might even be lucky enough to see an elephant in the rarely seen act.

3 of my friends, Kelsey, Julia, Annie and I decided to travel to the Western Region to Ankasa Nature Reserve located near the Ghana-Cote d?Ivoire border.  We had it all planned out how we were getting there and as you can guess, barely any part of our trip went according to plans!

We arrived at the STC bus station around 2 and were told that the 12:30 bus to Takoradi hadn?t arrived yet, so we could buy tickets for it.  We waited, and when the bus finally came, we stood in line, or ?cue? as they call it here.  I can say that forming a line in Ghana doesn?t mean anything, instead you?ve just got to cut and force your way in front of people.  So many people ended up doing this to us that we couldn?t fit on this bus. So?we waited a half hour and another one came at 3:30. By this time there was so much traffic within Accra that we ended up sitting in it for over a good hour at least.

Now, our plan was to take the bus to Takoradi (the farthest possible stop) and then catch a tro tro from Takoradi to Elubo (the border town) and catch a taxi to take us to the reserve.

The estimated bus time from Accra to Takoradi is 4 hours, which if all went as planned, would have put us in Takoradi when it was dark.  Then the tro tro ride to Elubo is 3 hours, which would mean we?d be traveling at night, and speaking to a couple of Ghanaian friends we made at the bus station, they said just get a hotel, don?t travel because its very likely you can get robbed out on the dark roads.

The bus ride ended up taking 6 WHOLE HOURS! We got a hotel room, with the help of a really nice Ghanaian man who?s been living in the US the past 8 years. He was really concerned about making sure we got to a hotel safely.  Saturday morning we woke up at 4 am, left the hotel at 4:30 and searched for the tro tro station.

It was still really dark at this time and we had only the slightest idea of where the station was located.  We walked back and forth and eventually with the help of a nice street vendor, we found the station and headed to Elubo.  We were immediately swarmed with taxi drivers the second we stepped out of the tro tro in Elubo, and eventually took a taxi for what we later found out to be almost double what it should have been! Oh well, its difficult when you don?t know the area and you are clearly a foreigner.

The drive to Ankasa was definitely an adventure?it was a dirt road going in to the forest, there were a lot of pot holes (definitely not smooth at all!), and it had just rained so the road was all muddy. We ended up getting stuck in the mud, and when the driver stepped on the gas, mud drenched his entire car?lol.

Finally we made it in to the main gate and spoke with one of the men working there. We explained to him how we wanted to stay in the camp in the park that we read about in our guide book.  He said that they got rid of that some years ago. We asked if there was any possible way to stay in the forest and he said it?s not recommended as there are no security guards nearby you.

We were pretty upset about this but got over it and stayed in this little place out in the forest near a village called the Frenchman?s Quarters.  It is difficult to describe, it wasn?t a hotel, more like a little bungalow.  We did 2 hikes throughout the day with a tour guide and it was absolutely beautiful! Our place we stayed in was about a 20 minute walk from the entrance to the park, so we had to walk through a village.  There is a big difference between the people who live in the city and those who live out in the rural areas.

In the rural areas, they are much more friendly towards you and welcoming. As we were walking along, a swarm of about 10+ kids came running out to us shouting ?obroni, obroni!!!?. They were so excited to see us and ended up chasing us all the way to the end of the road and waving goodbye until we were out of sight.  It was adorable.

At night time, the Frenchman as he is called, made us a dinner and we sat around playing games outside.  It was so peaceful being out in nature away from big cities and the chaos that comes with them.  We went to bed somewhat early since we were waking up at 430am to take a taxi to catch a tro tro back to Takoradi.

As we laid in our room we could hear all the noises of different animals and insects outside.  It was really peaceful and something I?m not used to!  However, I got the worst night?s sleep of my life.  We just shared one room to save some money and all 4 of us girls crammed in to one bed the size of a full mattress and it was realllllly tight!!  I hardly slept and woke up so sore this morning!  Today we traveled back to Accra and had much better luck.  We made it home by 2pm!

HOW TO GET THERE

The entrance road to the park is located at Sowodadzem, 120 km from Takoradi, 22 km from Elubo along the Takoradi-Elubo section of the Ghana-C?te d?Ivoire International highway.

Visitors have various options to get to the park, from using private vehicles, public transport (locally called ?tro-tro?) or taxis. There are plans to station bicycles at Sowodadzem (6km from the park entrance) for backpackers.

Entrance fees in the table that follows vary depending on the nationality, age, duration of stay and means of locomotion.
If in doubt please contact the park for details.

Legon Botanical Gardens: A rare sight of nature in the heart of Accra

US and China Discuss Complex Nature of Bilateral Relations

Together for greater harmony between man and nature