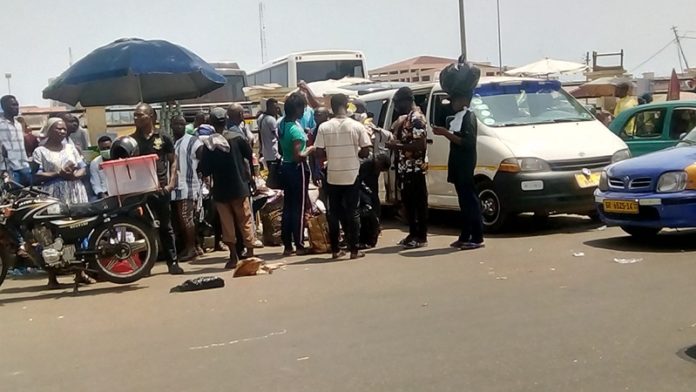 Some commercial drivers in the Accra Metropolis on Monday complied with the directives on the reduction of the number of passengers in conformity with the Presidential directives on social distancing against the spread of COVID-19.

The Ghana News Agency monitoring team observed that during the first day of the enforcement of the partial lock down in the Greater Accra region and other parts of the country, commercial vehicles which normally had three passengers on a roll loaded two passengers instead.

A reporter of the GNA who picked a commercial vehicle from Madina to Accra observed that the driver and his mate adhered to the directives accordingly.
Samuel Adofo, a drivers’ mate said he was not going to embark on any over overloading to incur the wrath of any Police officer.

Mr Adofo lamented that there would be reduction in their daily sales as they were finding it difficult to get passengers on board.

He wondered how their vehicle could to get passengers from the Accra Central Business District back to Madina.

He was however happy that there was no vehicular traffic as the trip which normally lasts over 90 minutes during ordinary week days.
“we just used about 30 to 40 minutes to cover”, he said

Mr Adofo told the GNA that he and his driver had not increased the lorry fare but was optimistic that they will manage to get their daily sales.

The GNA observed that there were few vehicles plying the highway of Madina to Accra Central with pocketful of petty traders at various traffic intersections.

The Ghana Private Road and Transport Unit (GPRTU) in a statement appealed to members to reduce the number of passengers in the bid to fight the spread COVID-19.

President Nana Addo Dankwa Akufo-Addo in his fourth televised address to the nation announced a partial lock down of large parts of Greater Accra, Kasoa and Kumasi.

The partial lock down is to achieve five key points namely stop the importation of the virus, contain its spread, provide adequate care for the sick, limit the impact of the virus on social life: and inspire the expansion of domestic capability and deepen self-reliance.