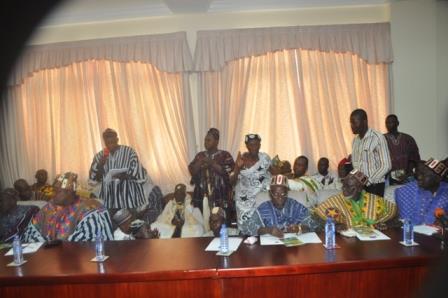 The Commission of Enquiry for the Creation of Regions, on Wednesday, met with petitioners from Gonja Land in the Northern Region.

The occasion marks the fifth sitting of the Commission, which held its first sitting on 21st November, 2017.

Mr Justice Stephen Allan Brobbey, Chairman of the Commission, said in his remarks that as had been the case in previous hearings, the Commission would hear first hand from the petitioners and seek to understand the back-ground to their petition.

He explained that the exercise of creating a region, under Article 5 of the 1992 constitution, was demand-driven; “and so we have a duty to listen to you, the people who have made the demand”.

“We are required by our terms of reference to establish the need and substantial demand for the creation of a region. This is a start in that process.”

He observed that this was the first time that the provisions of Article 5 of the 1992 Constitution on the creation or alteration of a region had been invoked.

“There is, therefore, a duty on all of us to ensure that we chart a course, which is ultimately in the best interest of our people,” said Mr Justice Brobbey.

On December 5th, 2017, the Commission would conclude “this phase” of its consultations, by meeting the Petitioners from the Mamprugu area of the Northern Region, he said.

Mr Justice Brobbey said the present hearings were being done in camera, “to create a congenial atmosphere for our chiefs and elders, who form the bulk of the petitioners, to feel free to give information”.

He said after the conclusion of the hearings of the petitioners, in Accra, the Commission would move to the regions for further consultations with the petitioners and members of the public who wished to make presentations on the creation of regions, on dates to be announced later to the public.

However, the regional and final meetings in Accra would not be conducted in camera.

The nine-member Commission was inaugurated by President Nana Addo Dankwa Akufo-Addo on October 19 2017, to examine petitions for the creation of new regions, and make recommendations to the Government based on its findings.