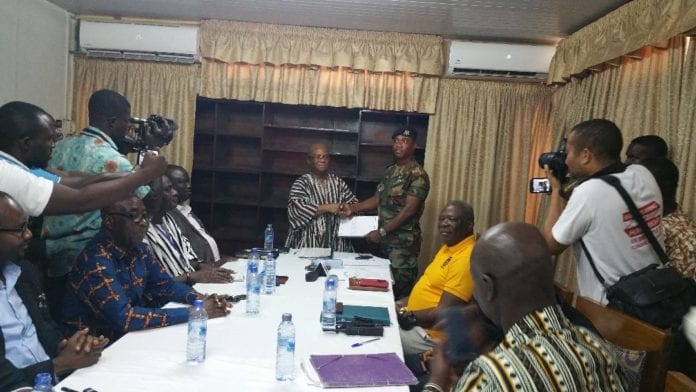 A six-member committee constituted by the Volta Regional Security Council (REGSEC) to investigate the disturbances in Alavanyo, which resulted in the death of two persons, has presented its report to the Council, in Ho.

Major Edward Appiah, Commander Rear, 66 Artillery Regiment, who chaired the Committee, said the report contained key findings, opinions and recommendations to the circumstances that led to the disturbances and loss of lives.

He said the Committee was hopeful that their implementation would address the concerns of the conflicting parties and restore peace to the area.

Dr. Archibald Yao Letsa, Volta Regional Minister, who received the report on behalf of REGSEC, commended the Committee for the work and said it would study the report and take decisions on the key findings.

He gave the assurance that “nothing will be swept under the carpet”, while anyone found culpable would be brought to book.

Dr. Letsa said those recommendations, which needed to be implemented locally would be expedited and called for support from all stakeholders to succeed.

On Sunday, January 13, 2019, two persons in Alavanyo Dzogbedze lost their lives in a crossfire between the locals and the military after an earlier misunderstanding between some youth of the community and a Police Operation Team.