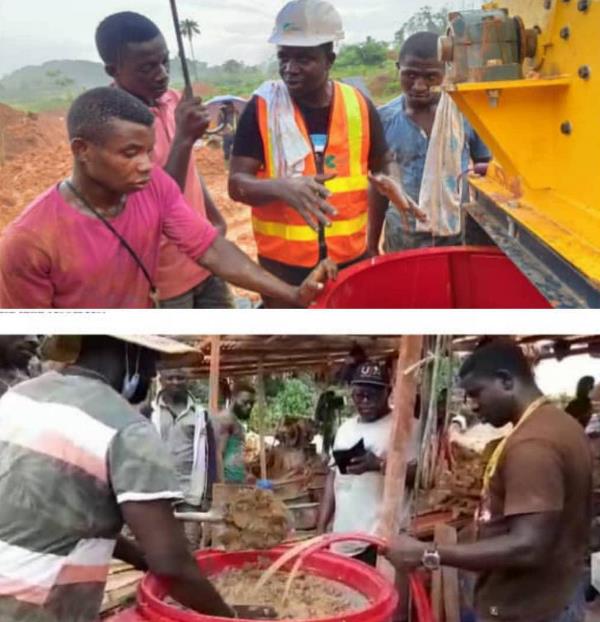 Commodity Monitor, an Accra-based commodity trading, logistics, and research company has showcased the first-ever mercury-free mining equipment that aggressively recovers more gold for artisanal and small-scale mining in Ghana without the element of harmful chemicals that pollutes the environment.

The firm has subsequently organised a demonstration, recently in the Prestea-Huni Valley District of the Western Region, to showcase how the equipment processes gold without the use of mercury, which endangers the environment, in its release copied to the Ghana News Agency.

Commodity Monitor’s gold processor or mercury-free equipment enhances gold recovery, lessens the time for the gold recovery process, and prevents the use of heavy metals like mercury.

This intervention aligns with the Government of Ghana’s agenda to promote responsible artisanal and small-scale mining (ASM) that eventually would control the destruction of forest and water resources.

“We want to transform the way small-scale mining is done in the country. Our test shows that gold recovered by a miner had a threefold increase in a day: from 12 pounds of gold to about 32 pounds of gold using the mercury-free mineral processing equipment. The processing plants will help catalyse job creation for the youth, save the environment, and protect the lives of miners and communities from mercury contamination.”

She said the mercury-free mineral processing equipment being deployed are available for small, medium and large scale miners.

The Director said ‘’We are deploying the equipment at this time because small scale mining is causing a serious threat to the country’s environment with Ghana being a signatory to face out mercury use from the mining sector.’’

The mining sector has contributed significantly to Ghana’s foreign exchange earnings and revenue generation. In 2019, proceeds from the export of minerals increased from US$ 5.76 billion in 2018 to US$6.68 billion, according to statistics from the Bank of Ghana.

Small scale mining, in particular, contributed 35 per cent of Ghana’s gold production in 2019. Despite these contributions, small-scale mining activities have mostly been carried out illegally, destroying water, forest and other land resources.

In his assessment, Sammy Bonzo, a small scale miner, said the gold processing plant has made the gold recovery process easy and faster.

“The washing of ore which usually takes a whole day or two to be done is now reduced to just under two hours using the gold concentrator introduced by Commodity Monitor”, Bonzo remarked, adding that “the mercury-free processing equipment could be the game-changer in remaining in business impressed about gold recovery output.”

The miners present expressed their satisfaction as the chemical-free mineral processing equipment will boost their production and keep them away from the harmful effects of mercury and other chemicals.

The exploitation of minerals has brought extensive levels of water pollution and land degradation, particularly with unregulated, high use and exposure of mercury. In 2017, Ghana ratified the Minamata Convention on Mercury to reduce and eliminate mercury use in the minerals sector.

It is against this backdrop that Commodity Monitor is driving the deployment of green mining solutions and technology, where miners can have high gold recovery without using harmful and dangerous chemicals like mercury.

Mercury is dangerous to human health with various studies showing that mercury exposure in artisanal and small-scale mining is a major but largely neglected global health problem putting miners and their communities at risk of permanent brain damage to seizures, vision and hearing losses and delayed childhood development as well as the destruction of the central nervous system.

It said scientist have discovered high mercury concentrates in soils and water bodies in mining communities as illegal operators continue to ravage the environment with Mr Eugene Ansah, a researcher, whose work dwelt on the Pra River Basin, covering southwestern parts of the country revealed deteriorating soil and water quality from heavy metals.