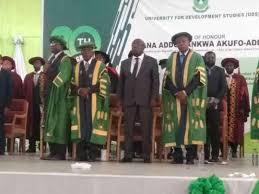 Professor Gabriel Ayum Teye, Vice-Chancellor of the University for Development Studies (UDS) has appealed for quick completion of ongoing infrastructure projects across all the campuses of the University to ensure its smooth conversion into autonomous status.

He said the quick completion of the ongoing infrastructure projects across the campuses of the UDS would also ensure that the University was ready to admit the vast number of students from the Free Senior High School programme, who would be seeking for admission at the University from next academic year.

Professor Teye made the appeal during the 20th congregation of UDS in Tamale on Saturday, where a total of 4,735 students comprising undergraduate and graduate students, who completed various programmes of study during the academic year, graduated.

The UDS runs four campuses and this Saturday’s graduation ceremony was for students from its Nyankpala and Tamale Campuses. Those from Navrongo and Wa Campuses had their congregation in Tamale on Friday, November 8, 2019.

President Nana Akufo-Addo, on November 10, 2018, announced that the Wa and Navrongo Campuses of UDS would be converted into autonomous universities to be known as University of Business and Integrated Development Studies, and University of Technology and Applied Sciences respectively.

Parliament has since passed the bill, which is awaiting Presidential assent, to allow for the formal conversion of the Wa and Navrongo Campuses of UDS into autonomous universities.

However, there have been concerns to the effect that the failure by the government to complete ongoing infrastructure projects across UDS Campuses, especially Wa and Navrongo, would affect their operations when converted, hence, the Vice-Chancellor’s appeal for quick completion of such projects.

Professor Teye said some of those infrastructural projects were over 15 years old and their quick completion would go a long way to ensure smooth conversion and operations of the new universities.

Professor Teye announced that the Overlord of Dagbon, Ya-Na Mahama Abukari (II) had allocated 1,200 acres of land to the UDS to establish a campus at Yendi, saying, “We have begun the process of acquiring the land and hopefully, before the end of this academic year, with assistance from well-wishers and government, we will start developing it”.

He said Management of the University had instituted the Vice-Chancellor’s Scholarship for brilliant-but-needy students, and qualified students would start benefiting from the facility from the next academic year to expand access to tertiary education for all, no matter their financial background.

He assured staff and students of the University that Management was determined to ensure safety on campus with the erection of a Police Post at the Tamale Campus and appealed to all landlords to provide security for UDS students at private hostels “Otherwise, we will be compelled to de-recommend those hostels for students”.

Mr Nutifafa Kuenyehia, Chairman of the Governing Council of UDS advised the graduands to render service with integrity to the state and be instruments of change wherever they found themselves.

President Nana Akufo-Addo, whose speech was read by Dr Kwaku Afrieyie, Minister of State at the Presidency, urged Metropolitan, Municipal and District Assemblies within UDS’s catchment zone to make use of UDS students’ third trimester field reports to help develop their Assemblies.

Senior Lecturer At UDS Calls For National Dialogue On Education