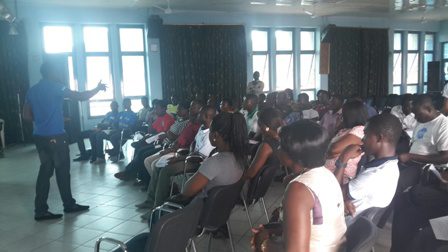 There is growing public fear in Koforidua that blatant disregard of covid-19 protocols might worsen rising cases in the Eastern Regional capital.

With the exception of areas like the banks and offices of telecommunication companies, where there is strict enforcement of social distancing, handwashing, wearing of face masks and checking of temperatures, many public places have let down their guards.

A visit by the Ghana News Agency in New Juaben South and North municipalities showed general public disregard for the COVID-19 preventive protocols in markets and lorry parks.

Meanwhile, the traders and hawkers, who were without nose masks, could be heard shouting on top of their voices to draw public attention to their wares.

The situation was not different in hairdressing salons and barbering shops as customers and apprentices were seen chatting heartily and giggling without face masks and no social or physical distancing.

There was equally general laxity in state departments and agencies as some at them at the ministries only mounted hand washing stands without water and soap.

Checks by the GNA at the New Juaben North and South municipalities also confirmed that funeral and wedding receptions were ongoing as well as other social gatherings with little or no observation of the protocols.

Most people expressed worry over the situation and, therefore, called for the enforcement of protocols, especially the wearing of facemasks and social distancing at markets and lorry parks.

A station officer, who spoke on condition of anonymity, told the GNA that they stopped enforcing the protocols, especially the wearing of facemasks because of non-enforcement by government agencies.

The officer noted that in the early days there was full enforcement like the Police often conducting random checks of facemasks on the roads, “but now everybody has relaxed so we can’t afford to turn passengers away for not wearing the mask otherwise we would lose out because the transport unions are many and in competition.”

The officer added that they were equally worried about the situation since there was a spike in the cases and so appealed for the enforcement of the protocols.

Ms Joyce Tay, a public servant, said the situation called for full enforcement of the protocols to ensure people complied with the protocols for public safety and called for strict adherence at the salons and barbering shops.

“For the past weeks, I have not visited the salon because I am scared of contracting the virus looking at the situation and I think that the authorities must look at the salons and barbering shops because they could be sources of the infection.”

The Eastern Region has recorded about 2,555 cases between January and the first week of August with all the 33 administrative Municipalities and districts, which hitherto had not recorded any case, recording cases.

Nearly 31,000 people, including health workers, had been vaccinated so far in the region.

Meanwhile, Mr Seth Acheampong, Eastern Regional Minister and chairman of the Public Health Emergency Committee on Covid-19, has directed all the 33 Municipal and District Assemblies to enforce the preventive protocols.

This followed a call by Dr Winfred Ofosu, Eastern Regional Director of Health for an emergency strategy to ensure compliance with the protocols to bring down the current surge in cases.

He warned that the daily average of the covid-19 cases recorded in the region had gone up drastically and if the trend continued it would overwhelm health facilities and systems.

He described the flagrant disregard of the preventive protocols, especially the wearing of the facemasks and the social distancing as a threat to the containment efforts and a huge worry to the health sector.

Meanwhile, the Regional Minister has confirmed that night clubs and pubs flagrantly disobeyed the protocols and operated as normal.

He said the Regional Security Committee would not hesitate to direct the security agencies to enforce the protocols for public safety.