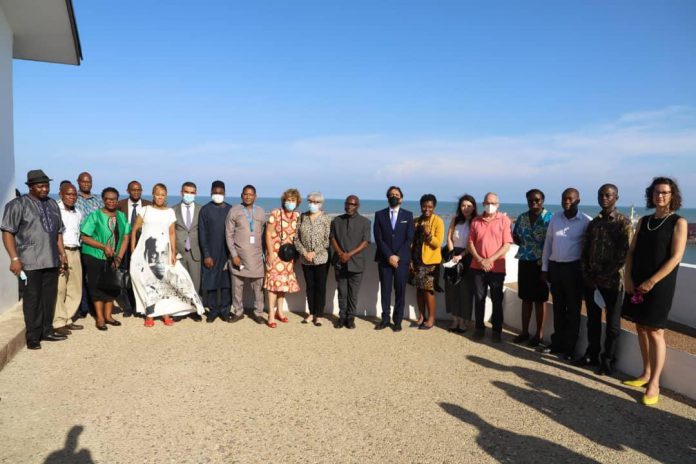 Mr Ivor Agyemang Duah, the Acting Executive Director of Ghana Museums and Monuments Board (GMMB) has urged the public to participate in the restoration of World Heritage Sites.

He said the conservation and protection of World Heritage Sites is a shared responsibility and urged all and sundry to participate to enable the GMMB to achieve its mandates.

Mr Agyemang Duah said this when 16 Ambassadors and High Commissioners in Ghana visited the ongoing non-permanen1t exhibition at the Ussher Fort in Accra.

The visit is to give them an insight into the current status of the Fort and an understanding of how best to collaborate with the GMMB and partners to restore Ghana’s heritage sites for posterity.

With support from the Dutch Government, the Ussher For Museum has been rehabilitated to restore and preserve as part of history.

The Acting Executive Director said the Ussher Fort Museum would take into consideration the history of the Ga Mashie community where it is situated.

” The exhibition is not a permanent one…..and is going to run for a while. It follows what we did in Ho, in the Volta Region…we have reopened the Ho Museum, we are rehabilitating the Ashanti Traditional Buildings in the Ashanti region in collaboration with the French Embassy,” he added.

Mr Agyemang Duah announced that the Board had rolled out a programme with the Diplomatic Community every month and at the end of July, they will be opening for the first time in 65 years the Western Regional Office, which will take care of the eight Monuments in that region.

He explained that because the region is huge and it cannot be under Central Region and they had to open that office for effective administration.

Mr Abdourahamane Diallo, the Head of Office and UNESCO Representative in Ghana emphasised the socio-economic importance of museums and monuments and encouraged all to join hands in restoring World Heritage Sites.

The Dean of the Diplomatic Community and the Ambassador of Columbia, Quintero Turbay expressed their appreciation for the guided tour of the museum, which she said, would allow them to “know and love Ghana more”.

She suggested that the programme should be organised regularly to expose them to Ghana’s historical sites as well as inform their support in restoring them.

The Diplomatic Community was also taken through a presentation on mandates of GMMB, the status of Forts and Castle in Ghana and the need to safeguard the shared heritage for posterity.

Ussher Fort has a rich history of having served as a trading post, slave dungeon, police post and prison. Most recently, it has been housing a museum of slavery that was temporarily closed in 2014.