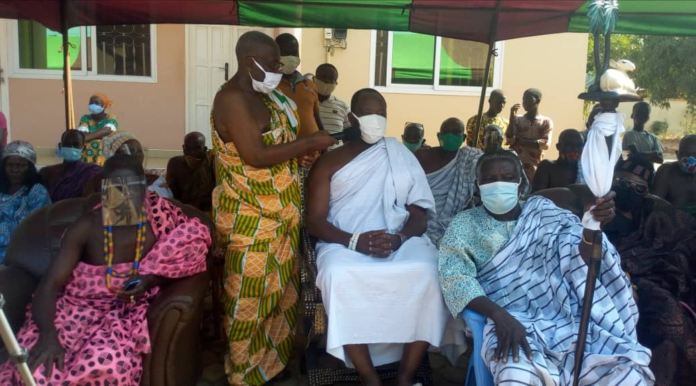 Torgbiga Adamah III, Makorsor of Some Traditional Area in the Ketu South Municipality has called for an amendment to some sections of Ghana’s laws to ensure sanity in the country.

Torgbiga Adamah observed that the ills in Ghana’s politics such as violence, insults and disrespect for the elderly and those in authority, which poses a threat to the peace and orderliness in the country, could partly be blamed on some provisions of the 1992 Constitution.

The Markorsor of Some made these observations, when Mr John Dramani Mahama, the Flagbearer of the opposition National Democratic Congress (NDC) and his entourage called on the Chiefs of Some to seek their support for the Party in the December polls.

He said laws that banned chiefs from active politics and vesting too much power to politicians should be amended because that had dwindled public trust in the system and given rise to impunity.

Torgbiga Adamah specifically mentioned that appointments of heads of the Judiciary-Chief Justice, the Police Service-Inspector General of Police (IGP) and the Electoral Commission (EC) by the President could stir distrust among members of opposition political parties for these key public institutions.

The Article 70 of Ghana’s Constitution provides that the President shall, acting in consultation with the Council of State, appoint among others, chairpersons and other members of the Public Services Commission which include the Civil Service, the Judicial Service, the Audit Service, the Police Service and the Legal Service.

Torgbiga Adamah said it was about time change was made to some of these provisions to allow for an independent system of appointing leaders to such sensitive institutions to enable the citizenry to have some level of trust in the public institutions.

“This country experiences some tension every election year by way of inciting comments, threats and violence. We’re witnesses to what happens during elections. Rival political parties always suspect each other and these suspicions are fueled by the fact that the EC Chair, who is the referee in this electioneering game is such an example.”

“Again, we tie the hands of our police officers such that they may be unable to enforce the laws and bring perpetrators to book, where politicians are involved because their head, the IGP is a political appointee.

And where the case goes to court, there may be political interference in justice administration. There must be some neutrality for people to have faith in our institutions,” Torgbiga said.

Cabinet approves request for the amendment to the Criminal Procedure Act, 1960 (Act 30) – AG

What does the 1992 Constitution say about Conflict of interest?

Manner of attempted arrest of Sosu offends Constitution-Speaker of Parliament