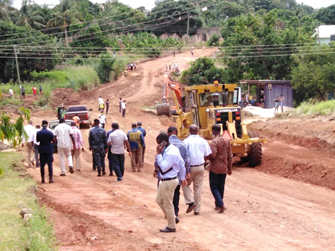 Mr Kwasi Amoako-Atta, Minister of Roads and Highways, has inspected the ongoing construction works of the Abusuakruwa-Agogoso link road in the Suame Municipality.

He was accompanied by Mr Osei Kyei-Mensah-Bonsu, Member of Parliament for Suame, and Minister for Parliamentary Affairs, Dr. John Osei Bobie, the Municipal Chief Executive for Suame and technocrats from agencies and departments under the Ministry.

The 10-kilometre stretch of road, which is being executed by Messrs Kofi Job Construction Limited, will link the Suame Municipality to the Atwima-Nwabiagya North District.

Mr Kyei-Mensah-Bonsu, who is also the Majority Leader in Parliament told the Ghana News Agency during the tour that, when completed, the road would ease the severe traffic congestion on the main Suame road

The works, which is about 60 percent complete, involves the construction of a drainage system and bridges, reshaping as well as asphalting of the road.

In all, the Suame Municipality is expected to benefit from the rehabilitation of about 70 kilometre stretch of roads in the next two years.

Other projects inspected by the delegation included the Suame Magazine road rehabilitation works and the Abusuakruwa-Daavi Junction drainage system.

Mr. Kyei-Mensah-Bonsu lauded the government for its commitment to expanding the country’s road network to quicken the pace of socio-economic growth.

Mr. Amoako-Atta said the government would not neglect any community regarding the allocation of road resources.

This is why the current mass road rehabilitation being undertaken across the country cut across all Districts.