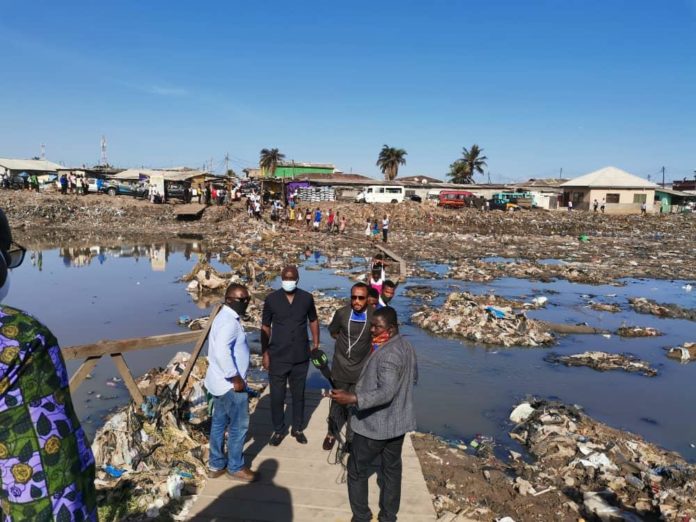 Barring any unforeseen circumstances, works on the construction of a bridge over the Chemu Canal merging the Ablekuma South and Ablekuma West constituencies at Chorkor in Accra will begin by this weekend.

Mr Jerry Ahmed Shaib, the Chief Executive Officer of the Coastal Development Authority (CODA), made this known when he interacted with the media in Accra on Wednesday.

The CEO of CODA led a team comprising contractors, consultants and journalists to acquaint itself with the situation at Chemunaa, where the footbridge collapsed and washed away following a downpour last Sunday.

He said the construction of a new bridge would have started since the Authority had already awarded the contract, but the COVID-19 outbreak delayed the process.

The bridge would comprise a driveway and a pedestrian walkway, expected to be completed within nine months.

CODA has earmarked the construction of a modern bridge across the Chemu canal, which merges two constituencies; Ablekuma South and Ablekuma West.

This is part of Ablekuma South Constituency’s allocation of one million dollars for special projects aimed at accelerating socio-economic development.

Mr Shaib said the Authority held two public engagements with the Community, which involved the Accra Metropolitan Assembly, Member of Parliament for the area, traditional leaders, elected officials and youth groups to solicit their views to build a consensus.

Responding to requests for the construction of a temporary bridge, Mr Shaib asked the residents to use a nearby footbridge in the interim while a permanent one was built.

He called on residents to cooperate with the contractor when the project starts and encouraged the youth to take advantage of income-earning opportunities that would come with the construction works.

Nii Adote Barima II, Chief of Chorkor, expressed happiness over the swiftness with which the CODA responded to the plight of residents since the old footbridge collapsed and expressed confidence that the new one would soon be completed.

Asante closes first tranche of US$7.5m Series A funding to bridge the gap in MSME lending in Africa