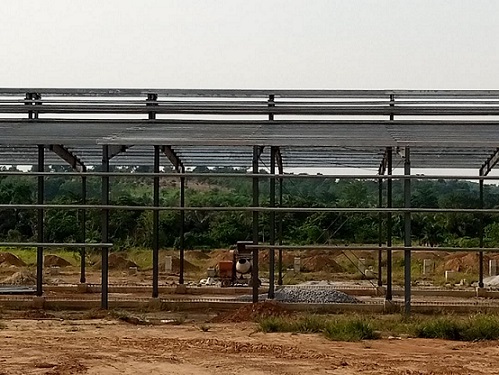 President Nana Addo Dankwa Akufo-Addo visited the project site on April 13, 2019, barely two years ago, and expressed his satisfaction with the progress of work on the project.

But during a visit, the Ghana News Agency (GNA) gathered from residents around the project site Rhovanni Royal Limited that the contractor had not been on site for some time now, with the project left under the mercy of the weather.

The few private security personnel sighted on site, however declined to speak to the GNA.
Although, the main administration block and other facilities had been completed, weeds were gradually taking over some works done on the factory.

When actual construction started, expectations of jobs were high among residents in the enclave, as promoters of the project estimated it had potential to create employment to about 1,000 people and indirect jobs to 1,800 residents.

The large deposit of clay in the enclave places the enterprise in a competitive position to contribute positively towards the construction of affordable housing for Ghanaians.

On completion, the factory is expected to use local raw materials to produce durable products such as bricks, roofing tiles, pavers, terracotta and wall tiles, and panels to promote the local construction industry.

During the visit, the GNA sighted the branch road to the project site had been tarred while portion of the site had also been fenced.

Commenting on the state of the project, Dr (Mrs) Freda Prempeh, Member of Parliament (MP) for Tano North Constituency, explained that the project was about 60 per cent complete, and commended the contractor for excellent work.

She gave the assurance that the project would be completed by the close of the year, saying government intended to release funds to enable the contractor to resume work.

Dr (Mrs) Prempeh, also the Minister of State in-charge of Works and Housing, explained that the government had prioritised the 1D1F programme and was committed to facilitate completion of all projects initiated under the programme.

This was because the 1D1F programme had the potential to create jobs for the teeming unemployed youth and build on the national economy, she added.