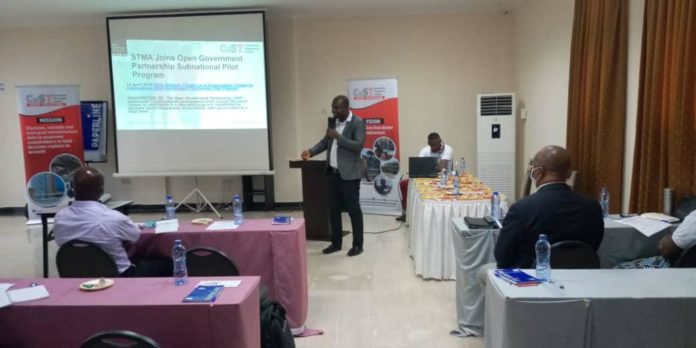 The Sekondi/Takoradi chapter of the Infrastructure Transparency Initiative (CoST) has introduced new MMDAs to CoST project which seeks to improve openness in the award of public contracts.

It also works to ensure benefits of improved infrastructure governance through strengthened transparency and accountability of infrastructure investments made by respective state or subnational members for a better life.

Mr. Isaac Aidoo, the Sekondi/Takoradi Manager of the programme, during a workshop to introduce the concept to the new Assemblies said their approach strengthened and built on the existing avenues and structures for transparency and accountability in the delivery of public infrastructure.

He said the engagement would increase access to information and encourage disclosure of infrastructure data to ascertain the baseline measure of transparency in public-infrastructure in MMDAs in the Western Region.

He said increasing the number of Procuring Entities (PEs) at the subnational level in the Western Region to adopt CoST was to promote transparency in public infrastructure delivery and empower citizens to hold-decision makers accountable.

He said bringing on board new Assemblies was a call by the Western Regional Coordinating Council (WRCC) during the launch of the first CoST Sekondi-Takoradi Assurance Report in January this year.

Increasing the number of Procuring Entities, would also increase participation of citizens in subnational government project procurement processes, promote reforms in the management of public finances and the procurement of public infrastructure, improve public confidence and a business environment, more attractive to investors and reduce commercial risks to businesses as a result of fairer contract award and administration system.

The CoST is designed to help governments strengthen infrastructure governance and achieve better outcomes by combining a set of standards and tools that strengthen transparency, stakeholder engagement and accountability in the sector.

It also offers a set of proven tools, standards and technical assistance to boost transparency and stakeholder engagement in infrastructure planning and delivery to facilitate accountability mechanisms.

In the last five years, their membership moved to 19 national and sub-national members and affiliates spanning four continents; with the Africa region membership made up of Ethiopia, Malawi, Tanzania, Uganda, Sekondi Takoradi Metropolitan Assembly (the first subnational-level chapter in the world to join CoST) and Mozambique (the newest country to be admitted by CoST in November 2019).

On “disclosure levels”, Mr Aidoo explained that the disclosure levels recorded in the first Assurance report painted an encouraging picture of attitudes and commitment to infrastructure transparency in Sekondi-Takoradi.

“However, there were also lessons to be learnt from the projects assessed in the assurance process, which covered one road project, one library development and upgrades of three local marketplaces.”

The Manager noted that the report highlights why thorough engagement with local beneficiaries was so critical in infrastructure delivery to avoid wasted public Resources and resentment.

The report, he said revealed that overall disclosure rates stood at 73 per cent in Sekondi-Takoradi, a positive starting point for the burgeoning CoST programme which could be improved on.

Dr Matthew Kwaw Somiah, a lecturer at the Faculty of Built and Natural Environment, Takoradi Technical University, who spoke on the first Assurance Report said the purpose of the assurance process was to bring to bear the lapses in the execution of the projects for improvement in subsequent projects delivery.

He charged members to use all avenues of information disclosure to disseminate information to the public for fruitful citizen and public engagement.

The CoST Sekondi-Takoradi Multi-Stakeholder Group chairman, Mr. Eugene Fredua , said the ultimate aim was to make life better regardless of the funding source.

He revealed that CoST International through CoST Sekondi-Takoradi chapter, had commissioned a Scoping Studies in Ghana which is led by the Ghana Anti-Corruption Coalition and expected to be completed in November this year.

The objectives of the Scoping studies he indicated, was to Identify how transparency and accountability within the current systems for delivering and procuring infrastructure needs to be improved at a national and sub-national level, Identify attitudes towards transparency and accountability in general and CoST in particular, amongst individuals and institutions across governments, industry and civil society and established a baseline measure of ‘transparency’ in publicly funded infrastructure projects at a national and sub-national level.

He said it would also explain how the CoST approach to transparency and accountability and its core features of disclosure, assurance, multi-stakeholder working and social accountability could add value to the current systems for delivery and procuring infrastructure at a national and sub-national level.

Mr Ofori-Atta said the scoping study would provide information relating to the conduct or current practice of infrastructure transparency within Ghana’s legal and policy context, establish a baseline measure of transparency in public infrastructure, provide evidence to engage duty-bearers in policy reformation and to inform the implementation of the CoST programme at the national and subnational levels.

Mr Abdual Mumin Issah, the new Mayor of Sekondi-Takoradi pledged his support and commitment to continue the good work started by the late Anthony K.K. Sam on CoST and ensure that the new procuring entities or assemblies got to the level of Sekondi-Takoradi.
He paid tribute to the late Mayor by stating that the success of the CoST programme in Sekondi-Takoradi was a result of the dedicated and selfless leadership of Mr Sam.

Mrs Eugenia Gifty Kusi, the Deputy Western Regional Minister lauded the CoST Secretariat for adding more assemblies or procuring entities as proposed during the launch of the Assurance Report.

The MCE for Nzema East Mr Frank Okpenyen called for the inclusion of the Metro, Municipal and District finance officers to be educated on the project.