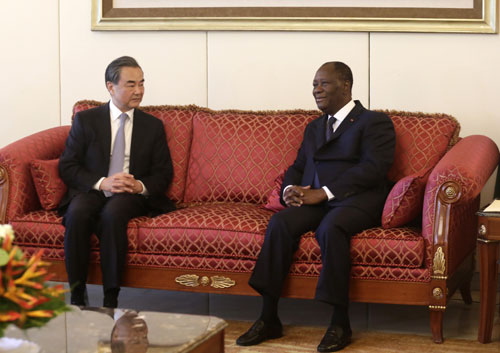 China appreciates Côte d’Ivoire’s prominent role in advancing the integration of West Africa, and supports the country to play a more important role

Alassane Ouattara asked Wang Yi to convey his warm greetings to President Xi Jinping, and expressed that both sides enjoy a long-standing friendship, increasingly deepen cooperation in various fields. Bilateral relations can be called as a model of Africa-China friendship. Being proud of having such a trustworthy cooperation partner, Côte d’Ivoire admires China’s development achievements, and is willing to learn from China’s development experience. Côte d’Ivoire highly praises the ‘Belt and Road” initiative proposed by President Xi Jinping, and believes the initiative could benefit vast developing countries as well as middle and small countries. Alassane Ouattara said the country is willing to actively participate in it, and continuously explore new areas for bilateral cooperation under the frameworks of the “Belt and Road” and the Forum on China-Africa Cooperation. Attaching importance to China’s international status, Côte d’Ivoire appreciates China’s diplomatic policies, and thanks China for playing an important role in safeguarding the interests of Côte d’Ivoire and African countries within the multilateral frameworks including the UN Security Council. The country believes that China is a stabilizer and catalyst of the cause of peace and development for mankind, hoping China could promote the international community to pay more attention to and care for African countries. The country adheres to the common stance of the African Union on the UN Security Council reform, and is ready to further enhance communication and coordination with China.

Wang Yi conveyed President Xi Jinping’s greetings to Alassane Ouattara, expressed that both countries enjoy a long-term friendship, and China is a sincere friend and reliable partner of Côte d’Ivoire. In recent years, bilateral cooperation has showed the momentum of vigorous development. China has become the largest financing source and the third largest trading partner of Côte d’Ivoire, and bilateral mutually beneficial cooperation enjoys broad potential. In the next step, China is willing to help Côte d’Ivoire to speed up its industrialization process, uplift capacity in self-development, gradually get rid of the single development mode that depends on export of primary products, and provide assistance within its capability to the integration process of the West Africa. Wang Yi said that the “Belt and Road” initiative proposed by President Xi Jinping is an important public product for the international community, and also the largest international cooperation in current world. China welcomes Côte d’Ivoire and other African countries to participate in the “Belt and Road” construction. It is believed related construction works could mutually integrate with the implementation of China-Africa ten major cooperation plans, injecting new impetus into bilateral cooperation. China appreciates Côte d’Ivoire’s prominent role in advancing the integration of West Africa, and supports the country to play a more important role in African and international stages. The Chinese is stands ready to jointly safeguard the legitimate interests of African and developing countries with Côte d’Ivoire’s.