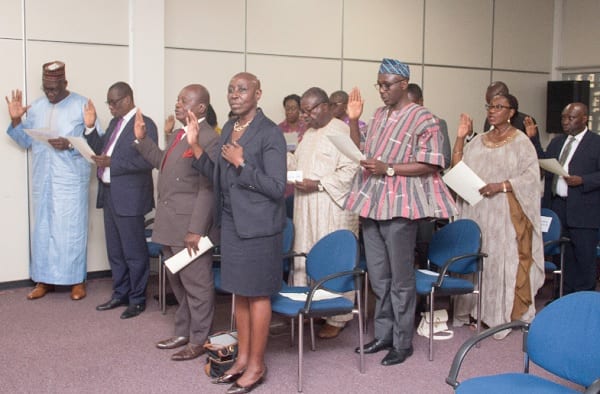 Seventeen new members of the Council on Foreign Relations (CFR) – Ghana, have inducted into office.

The induction ceremony, which took place in Accra, was conducted by Justice Barbara Ackah-Yensu, a Judge of the Court of Appeal, brings the total membership of the Council to 32.

Some of the newly inducted CFR-Ghana Council members include Professor Henrietta J.A.N. Mensa-Bonsu, President of the Ghana Academy of Arts and Sciences, and a former Director of Legon Centre for International Affairs and Diplomacy (LECIAD), University of Ghana.

Mr Daniel K. Osei, President, CFR -Ghana, who congratulated the 17 new Council members on their assumption of office; recounted that since the inauguration of the Council in February this year by President Nana Addo Dankwa Akufo-Addo, the Council has endeavoured to pursue its objectives at different levels.

“We started off by providing the platform for distinguish guests to engage the Ghanaian public on current international issues,” he said.

He mentioned that some of past speakers at their public lectures were Madam Baroness Valerie Ann Amos, the Director of the School of Oriental and African Studies, University of London; and Dr Mohamed Ibn Chambas, the Special Representative of the United Nations Secretary-General and Head of the United Nations Office for West Africa (UNOWA).

Mr Osei said some of the themes discussed during their previous public lectures such as multilateralism and sub-regional security were given further expressions in their Annual Report, which would be launched next month.

He announced that the Council’s first edition of its journal, the Baobab, was ready for publication and had been dispatched to the printers.

He said they would later announce a date in December when those two publications (Baobab and Annual Report) would be formally launched.

He said the journal had an interesting array of articles on such subjects as Responsibility to Protect (R2P), Peace-Keeping, Sub-regional Security and various aspects of the life of the late Secretary-General of the United Nations, Mr Kofi Annan.

Mr Osei said he had no doubt that they Council would have a lot to think about in the coming year; given current events in Guinea, Guinea Bissau, Benin, Togo and the Ivory Coast.

He said their international networking was progressing steadily; stating that “in fact two of our members will be visiting Morocco in December to finalize arrangement for collaboration with a Moroccan think tank”.

He said another delegation from the Council was expected to visit the ECOWAS Commission in December to formalize cooperation between CFR-Ghana and the Commission.

Prof Akua Kuenyehia, a former Vice President of the International Criminal Court and an Honorary Member of the CFR-Ghana, who delivered the keynoted address, said Ghana having gained independence some 62 years ago has produced a number of distinguished diplomats and international public servants.

She said the creation of the Council was to harness their pool of expertise and knowledge, and place them at the disposal of government to help resolve issues of development among other things in the country.

Dr Aubyn, in an interview with the Ghana News Agency, said he and his colleagues would bring their expertise to bear on the organisation.

The CFR-Ghana, which is a think tank on the country’s foreign policy and international relations, is modelled on well-established think tanks such as the Council of Foreign Relations in the USA and the Chatham House in the United Kingdom.

It was started in 2008 during the tenure of Mr Kabral Blay Amihere as Ambassador to Cote d’Ivoire when he floated the idea to a number of like-minded Ghanaians, and after months of consultations, the Council was duly registered as a private company limited by guarantee on February 23, 2011.

Its establishment is intended to enhance the advancement of the country’s foreign policy and its relations within the comity of nations.