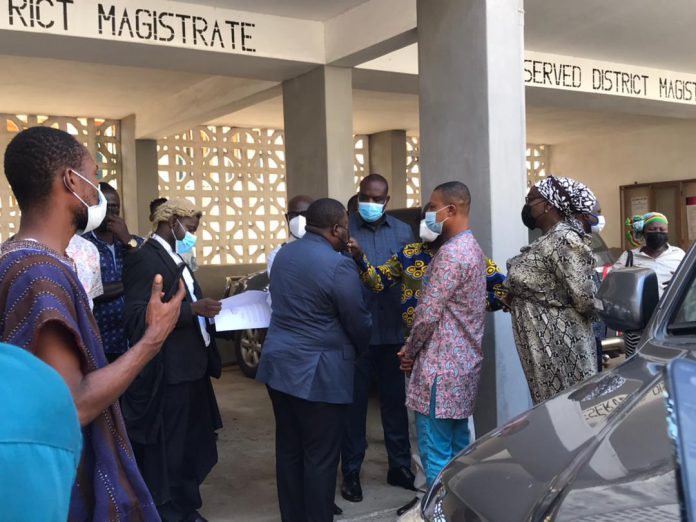 A Cape Coast High Court has adjourned the dual citizenship case of James Gyakye Quayson, the Assin North Member of Parliament (MP) for the hearing of two applications filed by him.

The legal team of Gyakye Quayson, the first respondent, led by Mr Abraham Amaliba, had filed a ‘stay of motion’ and ‘statement of appeal’ applications to recuse the presiding judge, Mr.Justice Kwasi Boakye, from the hearing.

The applications was sited on the claim that the presiding Judge in one of his comments predetermined the judgement, therefore, the decision could be biased.

Earlier, the parties went to the chamber to discuss issues with Justice Boakye and he overuled on the application of stay of motion, stating that until a higher jurisdiction ordered or the Chief Justice directed him to recuse himself, he would continue proceedings.

The case was, consequently, adjourned to Tuesday, May 18, for the hearing of the statement of appeal to restrain the judge from further proceedings.

Mr Osman Alhassan, a member of the National Democratic Congress’ legal team, said the Court should have determined the issues of jurisdiction before proceeding to the substantive matter.

But it rather asked both parties to file their written submissions, which meant that the Court was proceeding to determine the substantive matter.

Hence their notice of appeal against the order of the Court to file their submissions.

However, Mr Henry Nana Boakye, a member of the New Patriotic Party’s legal team stated that the motion filed by the NDC team was a strategy to delay the case.

He explained that the Court had earlier ordered the parties to submit their written statements for the ruling of the case and that the first respondent was intentionally delaying proceedings.