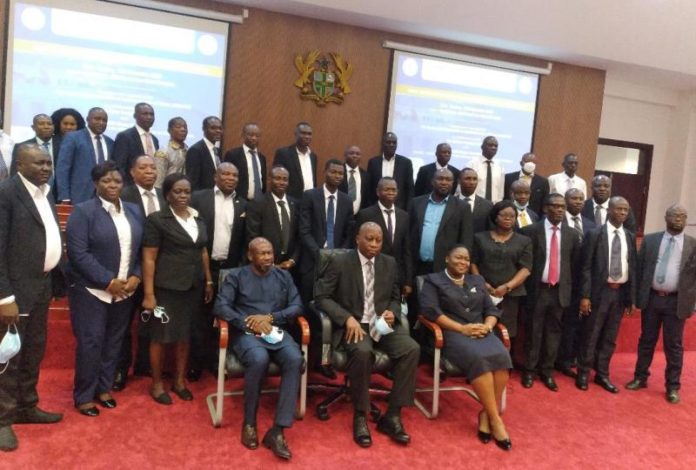 The registrars are being trained on how to facilitate electoral disputes processes at the courts so that such cases can be handled swiftly and without delay.

Justice Samuel K. Marful-Sau, Director of the Judicial Training Institute (JTI) said the training was to equip the participants to function effectively in handling electoral disputes to facilitate early disposal of such cases since it was time bound.

The training was in collaboration with JTI and the Senior Staff Association of Judicial Service of Ghana (SSAJUG) with funding from STAR Ghana Foundation.

“It will furnish participants with the processes involved in the commencement of parliamentary election disputes,” he said.

Justice Marful-Sau, who is also a Justice of the Supreme Court said electoral disputes should be handle with urgency, because it was crucial to the country’s democratic and governance process.

“It is appropriate to train and sensitize you so that you do not treat election disputes cases as any other case,” he added.

He commended the Executives of the Association for organizing the workshop to equip members to discharge their duties effectively.

Mrs Marilyn E. M. Suttah, the Interim National President of SSAJUG, said the role of registrars towards an effective election dispute adjudication could not be over-emphasized, because they served as first point of call for litigants, hence the need to be trained and sensitized on the provisions that guides their work.

She said it had become necessary for the capacity of frontline staff to be enhanced, especially, on their role in the adjudication of electoral disputes to effectively and efficiently provide the required support to judges.

She said it was their utmost priority to ensure that justice was delivered in an excellent manner to enhance public perception in seeking legal redress instead of taking the law into their own hands.

“This can only be achieved through continuous legal education and capacity building programmes especially for the senior staff,” she said.

She said they would be expected to impact the knowledge acquired in a professional and effective manner to their colleagues.

Mr Ibrahim-Tanko Amidu, the Executive Director of STAR Ghana Foundation, said they decided to partner the Judicial Service because of the role it plays in the country’s sustainable governance through the administration of justice.

“We cannot talk about sustainable development, peace and security without factoring in the indispensable role the Judiciary played in that regard,” he said.

Mr Amidu said the Foundation had been supporting efforts at achieving sustainable governance especially during elections, adding that, they had approximately spent $7million in that regard.

He said they were looking forward to engaging the Service beyond election disputes and adjudication into ways they could both deepen, consolidate the country’s democratic governance, freedom and justice.

Goat thief to appear in court on October 18 for sentence

Driver in court for running over motor and pillion rider