A 20-year old labourer, Kweku Asamoah, was on Wednesday remanded by an Accra Circuit Court for possessing quantities of dried leaves suspected to be narcotic drugs without lawful authority. 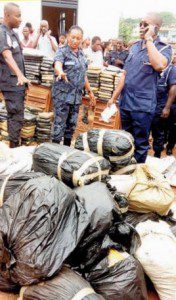 Asamoah pleaded not guilty to the charge before the court, presided over by Mr Aboagye Tandoh, but was remanded to reappear on May 3, for trial.

Prosecuting, Police Chief Inspector Kwabena Adu told the court that the complainants are policemen from the Nima District while the accused person is a labourer living at Avenor.

He said on April 12, at about 2200 hours, the complainants, who were detailed for night patrols, had information that the accused person was dealing in dried leaves suspected to be Indian hemp.

The prosecution said the complainants quickly proceeded to the Neoplan Station where the accused was alleged to be hiding with the stuff.

He was seen and arrested together with quantities of dried leaves suspected to be Indian hemp concealed in a polythene bag.

Police Chief Inspector Adu said Asamoah told the police that it was given to him by his rival who was chasing the same lady with him, and that he believed it was a set up.
GNA/www.newsghana.com.gh