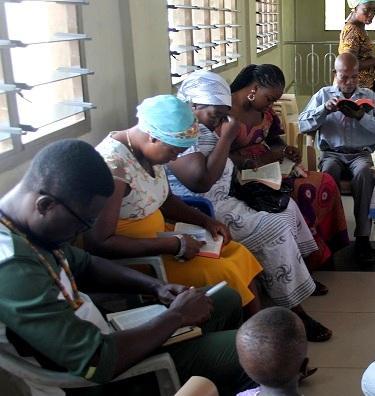 Some churches in Agorkpo Newtown in the South Tongu District of the Volta Region have taken to Bible studies in cells in response to the President’s directive against social gatherings, including church services, to prevent the spread of the COVID-19.

The cells were made up of six to 10 people gathered at different places in the various church premises to discuss the Bible, with some lasting for an hour.

Mr Samuel Edutemi, a member of the Central Harvest Ministry International Church, who spoke to the Ghana News Agency, said they decided to have Bible studies since church services were suspended.

He said they did not want to go against the President’s directive, hence the decision to break the congregation into cells with less than 25 people.

“Not all the church members are likely to come here at the same time that is why each Bible study group would last for an hour for another group to have theirs,” he said.

Watered Home Chapel also had the same Bible discussion meetings with the congregation in cells.

The Methodist Church of Ghana in Agorkpo was closed as the members said there would be a live broadcast of the service on social media from the Headquarters in Accra.

President Nana Addo Dankwa Akuffo-Addo, on Sunday, March 15, announced a ban on all funerals, church services and other social gatherings as part of measures to contain the COVID-19.