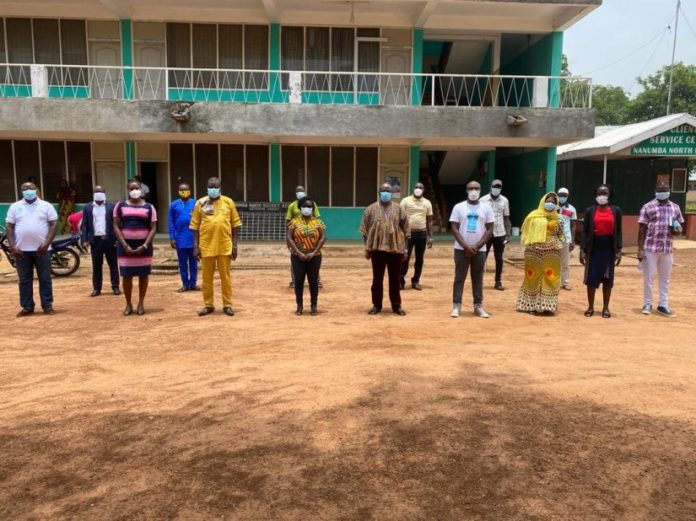 WaterAid Ghana, a non-governmental organization, in collaboration with the Mastercard Foundation has launched a sanitation and hygiene project aimed at ensuring safety in three municipalities as part of effort to fight the spread of the novel coronavirus disease.

The project, which is being implemented in the Nanumba North in the Northern Region, Kpone Katamanso in the Greater Accra Region and Akuapem North in the Eastern Region, adopts the structured hygiene and behaviour change campaign on the five core recommendations of the World Health Organization and Ghana Health Service on hygiene behaviour.

It includes handwashing with soap under running water, respiratory hygiene; maintaining physical distancing, cleanliness of surfaces frequently touched as well as referral and self-isolation in the beneficiary Municipalities.

Speaking at the launch of the project at Bimbila in the Nanumba North Municipality, Mr Jesse Coffie Danku, the Head of Programmes, who represented the Country Director of WaterAid, said the main objective of the project was to support government-led initiatives in the fight against the COVID-19 pandemic in the country.

The Head of Programmes noted that the project was one of the numerous projects under the Mastercard Foundation COVID-19 Recovery and Resilience Programme, and it was designed based on WaterAid’s extensive experience in running national and local hygiene behaviour change campaigns under their ABCDE.

He said the ABCDE which stands for Assess, Build, Create, Deliver and Evaluate were steps of the Behaviour Centred Design Approach being adopted by WaterAid to partner relevant institutions to help fight the spread of the virus and its related issues.

Mr Danku said a number of initiatives had been implemented by government to fight the spread of the pandemic and WaterAid Ghana would also be working with health professionals and psychologists to pre-empt stigmatization of COVID-19 patients and support their integration into their respective communities and places of business.

He thanked Mastercard Foundation for partnering with WaterAid to support the government’s fight against the COVID-19 pandemic.

Mr Abdulai Yaquob, the Nanumba North Municipal Chief Executive (MCE) expressed gratitude to WaterAid Ghana and its partners for supporting the municipality to fight the pandemic and its associated stigmatization.

Mr Yaquob said the initiative was laudable as it was going to take into consideration what the assemblies had been doing to ensure that resources were taken to where it was needed most and pledged the Assembly’s support towards the success of the project.