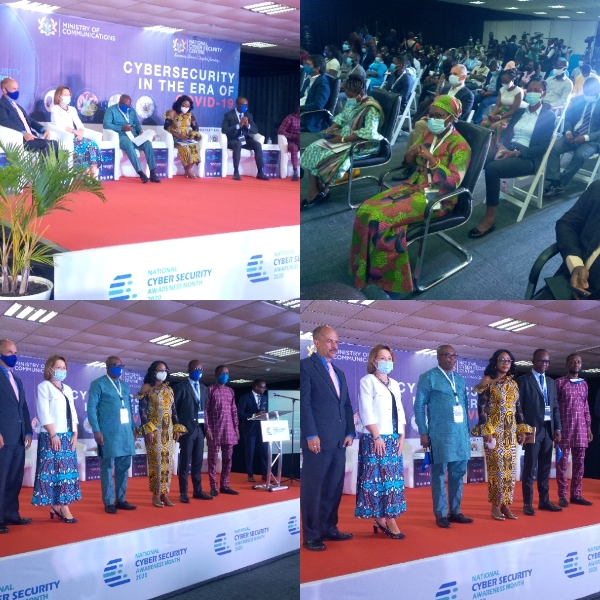 Madam Ursula Owusu Ekuful, Minister for Communications, says the advent of COVID-19 has demonstrated an increased dependency on technology by governments, private sectors and individuals globally.

She said reliance on Information Communication Technology (ICT) and the internet in 2020 had led to immeasurable opportunities for citizens, especially children and young people who relied on it to conduct research, attend classes, study, and socialize.

Speaking at the formal opening of this year’s “National Cyber Security Awareness Month and Launch Of Internet World Foundation (IWF) Child Online Protection Reporting Portal,” on the theme; “Cybersecurity in the Era of COVID-19,” she said the theme was reflective enough considering the circumstances the world found itself in where digital infrastructure had become the bedrock of socio-economic development.

She said 2019 report launched by the Broadband Commission for Sustainable Development Goals, posited that more than 50 per cent of the world’s population was now online, whereas children constituted more than 30 per cent of Internet users.

“By 2022 another 1.2 billion new users would have been added to this figure, with children being the latest-growing online demographic,” she said.

Mrs Ekuful noted that children and young people made up a significant percentage of internet users.
She said the utilisation of the internet had threatened young people with Child Sexual Abuse Materials (CSAM).

Government over the past three and half years through the Ministry, she said, had implemented a number of initiatives to secure its digital journey, adding that, in 2018 Ghana launched the safer Digital Ghana campaign to create awareness among children, public businesses and government.

The country also ratified two important international treaties on cybercrime and cybersecurity, which were the African Union Convention on Cyber Security and Personal Data Protection, known as the ‘Malabo Convention’, and the Convention on Cybercrime, also identified as the ‘Budapest Convention’.

The Minister said the Country also revised its National Cybersecurity Policy and Strategy and was preparing to submit it to Cabinet for consideration before the end of the year.

“To further improve the regulatory regime for cybersecurity, my Ministry has submitted a draft Cybersecurity Bill to Cabinet for consideration before the end of the year,” she said.

Ms Anne-Claire Dufay, the Country Representative of UNICEF Ghana, said cybercrime was real and an unpleasant situation around the world.

She said internet users increased from about nine million in 2017 to 20 million globally which called for the establishment of mechanisms to protect them in the digital space.
She said UNICEF was impressed at steps taken by Ghana as leaders in the fight against cybercrime in the West African sub-region.
Dr Albert Antwi Boasiako, National Cyber Security Advisor, said about 11,550 cases of Cyber Crime had been recorded in the country through the National Cyber Security Centre this year.

He said as part of measures to create awareness, the Centre in Partnership with the Ministry for Communication and stakeholders had sensitized 4,000 Senior High School students on hygienic online practices.

He said the introduction of the Portal would help to protect the image of children online and secure them from potential abuse and manipulations.