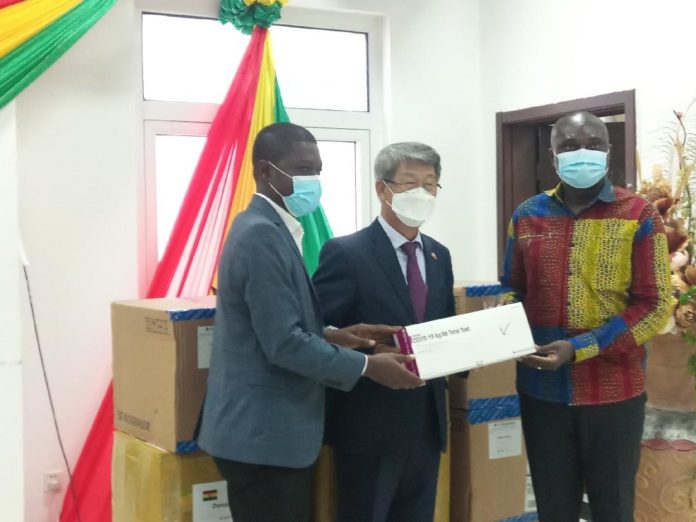 The Korean Government has donated medical supplies to the Government of Ghana to assist in the fight against COVID-19 pandemic.

Mr Sungsoo Kim, the Korean Ambassador to Ghana presented the items to Mr Charles Wiredu, a Deputy Minister of Foreign Affairs and Regional Integration in Accra.

The donation was from the Government of Korea, the Korea International Development Agency (KOICA), Korea Foundation for International Healthcare (KOFIH), SD Biosensor, and Good Neighbours, a non-governmental organization.

Mr Wiredu on behalf of the Government and People of Ghana expressed gratitude to the Government of Korea, KOICA, KOFIH, SD Biosensor, and Good Neighbours for the gesture and described it as timely and critical to the fight against the COVID-19 pandemic.

“We look forward to collaborating more in the fight against this pandemic,” he stated, adding that, said since the outbreak of the novel Coronavirus, the Ministry of Foreign Affairs and Regional Integration had been at the forefront of coordinating international support for Ghana’s fight against the pandemic.

The Deputy Minister noted that the Ministry, together with its Missions abroad, had been working tirelessly not only to guarantee the interest and welfare of Ghanaians but also to mobilise resources and goodwill to support the country’s fight against the virus.

“This donation is, therefore, a testament to the Ministry’s efforts to mobilise international goodwill to support our country’s fight against the virus. It is also a testament to the longstanding and exemplary relations between the two countries, spanning over four decades,” he said.

Mr Wiredu said since the establishment of bilateral relations, Ghana and Korea had and continue to reinforce cooperation by collaborating on a wide range of bilateral and international issues on economic, trade, investment, technology, and security.

He said Ghana recently played an instrumental role in facilitating the release of five Korean nationals kidnapped by pirates off the coast of Benin in the Gulf of Guinea.

The Deputy Minister intimated that COVID-19 was not just a national problem but a global issue and “a threat to our collective existence,’” and that it had brought to the fore interconnectedness, adding that “that is why we require a collective response to mitigate and possibly eradicate its devastating impact”.

He said the Government of Ghana was encouraged by the global response and commended efforts made by all Governments and institutions across the world to curb its spread.

“We are confident that the combined efforts by all institutions, both public and private would yield the right results and eventually bring our lives back to the normal that we know.”

Mr Wiredu said it was worth noting that under President Nana Addo Dankwa Akufo-Addo, measures had been put in place to control the spread of the virus in the country.

He said they included the establishment of structures to battle COVID-19 at the national, regional, and district levels as well as the strategic deployment of aggressive tracing, testing, and treating methods.

Mr Wiredu said Government’s efforts had been very successful and commended the citizenry for the support.

He commended Mr Jeong Dongik and Mrs Kim Jeeyoung, both Councilors of the Korean Embassy, who ended their tour of duty in Ghana on Friday, August 14, and due to return to Korea on Tuesday, August 18.

“We thank you for your hard work in enhancing Ghana-Korea relations. We wish you both a safe journey back home and every success in your future endeavours.”

Mr Sungsoo said the Korean Government had successfully managed to contain the initial spread of the coronavirus and that they were now actively assisting their international partners with best practices, lessons learned, data, supplies, and other resources.

“We are doing our utmost to meet the demand in other countries for medical equipment and supplies by ramping up domestic production capacity,” he said, adding, “Korea has already supplied test-kit to more than 40 countries and is producing other humanitarian assistance to countries with less developed healthcare systems.”

Mr Sungsoo said the Government of Korea was committed to sharing Korea’s policies and practices with Ghana for the country to manage its COVID-19 situation.