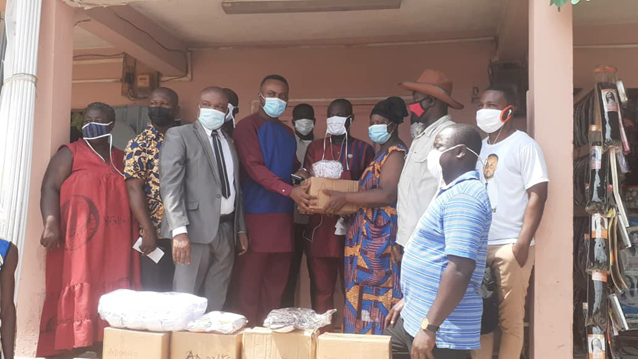 Mr Fred Obeng Owusu, the Municipal Chief Executive (MCE) for Old Tafo, has led a team of officials from the Assembly to distribute face masks and hand sanitisers to identifiable groups in the Municipality.

Accompanied by the Member of Parliament (MP), Mr Vincent Ekow Assafuah they handed over boxes of face masks and sanitisers to the leadership of Churches, Mosques, lorry terminals and markets.

The donation formed part of efforts by the Assembly to encourage adherence to the COVID-19 safety protocols amid the increasing cases of the disease.

It also sought to intensify public education on the viral disease by promoting behavioural change in practices that serve as fertile grounds for infections.

Mr Owusu said the Assembly had provided Personal Protective Equipment (PPE) to both health workers and the general public to contain the spread of the disease since the outbreak of the pandemic last year.

He said it was necessary to intensify public education campaigns, following the rising cases in the last few months.

“We are providing these PPE to encourage the people to observe the protocols which are very key to the fight against the virus,” he told the media at a presentation ceremony at Pankrono.

He encouraged them to use the PPE to collectively win the war against the pandemic.

The MCE urged the Clergy and Muslim leaders to encourage their congregations to take the safety protocols seriously to protect themselves and their families.

Mr Assafuah said the government was committed to defeating the virus but the success of the fight largely depended on the attitude of the people to the preventive protocols.

He said Ghana was among the countries that had properly managed the pandemic in the world since the outbreak and called on the people to complement the government efforts to contain the virus.