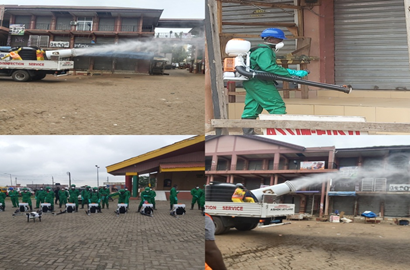 Major markets and lorry terminals in the Ashanti Region were on Tuesday closed down to pave way for the second phase of disinfection exercise in the Region to begin.

The exercise, an initiative of the Ministry of Local Government and Rural Development (MLGRD) is being done simultaneously in the country to rid public places of bacteria, viruses and other microscopic organisms.

It is also to make these public places safe for trading and other business transactions to take place, as the nation strive to contain the spread of the COVID-19 pandemic.

A similar task was undertaken some months back which saw the clean-up, fumigation and disinfection of some major public places nationwide.

Mr. Simon Osei Mensah, the Ashanti Regional Minister, briefing the media in Kumasi, on the sidelines of the exercise, said close to 350 markets in the Region would benefit from the exercise, adding that, “it is taking place in all 46 sub-metros, municipals and districts in the Region.

Explaining the duration of the exercise, he said it was not going to last more than two hours in each market center or lorry terminal and noted that traders could go back to shops a short while after the disinfection.

Mr Osei Mensah, therefore, appealed to all concerned parties to comply with the instructions of the exercise which was aimed at managing the spread of COVID-19 and also ensure tidiness in the markets, lorry terminals, public toilets and other public places.

Mr. Osei Assibey-Antwi, the Kumasi Metropolitan Chief Executive, said the Assembly was working closely with the management of Zoomlion, contractors for the project, to ensure the execution of quality work.

He said the Assembly had therefore stationed environmental health workers at the various markets to ensure that the proper thing was done.