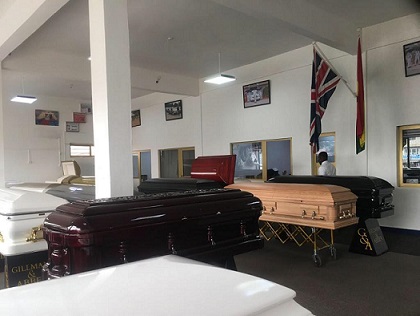 Restrictions on funerals to contain the spread of COVID-19 in the country are beginning to have negative impact on players in the death business.

Whiles a few entrepreneurs in the sector have closed shop, others are hoping the ban on funerals will be lifted soon for a quick revival of the industry.

They said the ban on funerals, with less than 30 people allowed to attend burial events, was hitting hard and “frustrating.”

Madam Dorcas Antwi, 24, a Dealer in funeral supplies, told the GNA the sector was “dying slowly.”

She said because dead bodies were no longer being laid in state, bereaved families were spending less for burials, with some, unwilling to honour the dead because of the pandemic.

Madam Antwi said it was getting dire with many families now practicing “from morgue to cemetery.”

She said there was an increase in demand for tomb flowers and garments for deceased persons when restrictions were relaxed, but no more.

Mrs. Alice Dodoo, an Event Caterer, also bemoaned the low patronage of catering services due to the restrictions.

She said all pre-orders had been cancelled after the restrictions were announced and said her investments were going bad.

“Before the restrictions, three clients made pre-orders. They called me later and cancelled the orders because the funerals have been cancelled,” she said.

At the Gillman and Abbey Funeral Service Limited in Accra, Mr. John Coffie, the Managing Director said, “funerals are now conducted in a private manner rather than the traditional way…”

He said due to the restrictions, some clients were buying less expensive caskets because there would be no funerals.

Mr. Coffie said the number of clients who visited their showroom continued to go down with reduction in sales.

“People do not visit our showrooms as frequent as it used to be. From Monday to Thursday, we have not recorded sales as we expected.”

He said on the average, they sold 15 caskets in a week, however, it had not been same since the restrictions.

Mr. Coffie said the patronage of services of pallbearers had also reduced.

Atta Kwaku John, an Undertaker, based at the Korle-Bu Teaching Hospital, said COVID-19 and the restrictions were gradually throwing them out of job.

He said for about three weeks, he dressed only one dead body and said if the situation continued, he would look for a security job.

Serwa Akoto, another Undertaker, said many clients were opting for private burials and shunning their services.

“Now, we are just there. We don’t prepare bodies and there are no funerals so you can imagine. Things are now difficult. The business is dying, yes. It is dying,” she lamented.

Mr. Percy Ashong, the family Head of the Awusa-Kpong family, in Accra, told the GNA that due to the restrictions, decisions concerning funeral rites and the honouring of the dead were being reconsidered to ensure compliance with procedures set out to curb the spread of the virus.

“As a family, we perform some rites for the dead …but we are reconsidering them because of the pandemic and the funerals will not be like before. We will not buy some things and we may not need the services of many people…,” he said.