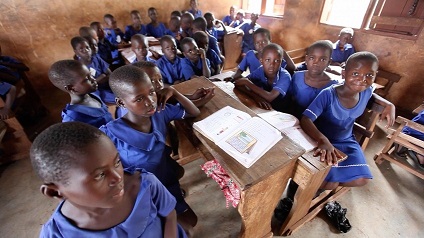 As schools have reopened in the midst of the third wave of the covid-19 pandemic, observation of the Covid-19 preventive protocols have drastically dropped especially at the basic levels.

The use of the facemasks, which were highly adhered to after the nine-month long school break, has been completely abandoned. The handwashing stations are no more in place, the checking of temperature before entering the classroom and the use of the hand sanitizers are all no more being used.

This situation has raised public concerns with the safety of the school children, considering the fact that social gatherings such as funerals and parties are being organised without recourse to any of the protocols.

This indicates the possibility of a teacher contracting the virus and spreading it to the students in the class is very high.

This came to light when the Ghana News Agency under the Mobilising Media against Covid-19, a project being implemented by the Journalists for Human Rights (JHR) in collaboration with the Ghana Journalists Association (GJA) visited some schools in the New Juaben South Municipality.

In 10 basic and Junior High schools visited in the municipality, the situation was not different, school children were seen in the classrooms without nose masks with their teachers giving instructions without observation of the social distancing.

The GNA observed that most of the schools, which began the shift system, immediately after the long break to make way for enough spacing and physical distancing in the classrooms had stopped resulting in large class sizes with no space to allow for social distancing.

Furthermore, most of the schools have reverted to the six to eight contact hours other than the four contact hours directed by the government when schools reopened in January this year, to reduce the contact hours as a tool to control the spread of the diseases, whiles the compulsory hand washing has also stopped.

During the visit, the GNA observed that the handwashing stations had become cosmetic. Whiles some had no water, soap, or tissue papers, others had water but were not being used because nobody was enforcing as it used to be in the early days when school re-opened after the long break.

Some of the school children interviewed, told the GNA that the enforcement of the protocols had gone down unlike the first term when school reopened.

Joyce Koi, a basic six pupil of the Densuano L/A Primary School said, “first, they were checking our temperature as well as wearing of the facemask all the time but now, the teachers don’t insist on it anymore”.

She said periodically, they were asked to go and wash their hands, “but now, the containers have no water sometimes, when you want to wash your hand, you have to buy a sachet of water and use it, so we have all stopped”.

According to Joyce, she and her colleagues were worried but there was nothing they could do adding that, another worrying situation was the cancellation of the shift system which has resulted in many children in the classrooms, making it very difficult to observe the social distancing.

In her class, they were about 54 pupils and sat in twos or threes depending on the size of the desk but hardly do they observe the social distancing protocol and because of the long class hours, the few who used the mask removed them at a point exposing them and the entire class to danger as far as covid-19 was concerned.

The World Health Organisation (WHO) has stressed the need for keeping to the preventive protocols especially the use of the facemasks despite the roll out of the covid-19 vaccinations worldwide and the fact that the preventive measures were key to achieving a reduction in infection.

So far, about 40,000 people have received the first and second jabs of the AstraZeneca vaccines and GNA gathered that vaccination was ongoing in all the 33 districts in the Region, meanwhile, it’s expected that about 1.7 million people above 18 years would be vaccinated in the Region.

Meanwhile, the Eastern Region has recorded cumulatively over 6,376 confirmed covid-19 cases including more than 785 students in all the 33 administrative municipalities and districts and 126 deaths so far, the New Juaben South municipality had recorded over 1,151 as at September 20, 2021.

Dr John Ekow Otto, Eastern Regional Deputy Director of Public Health, has stressed the need for the preventive protocols to be observed strictly adding that “Covid-19 remains a threat, we are recording cases on daily basis.”

He advised the public to take responsibility of their own protection explaining that it was unfortunate there was no enforcement of the protocols at social gatherings and public spaces such as the schools and markets and urged all not to let down their guards at all.