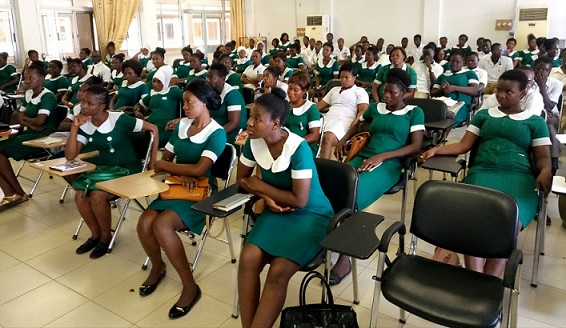 Some nurses and midwives in the Upper East Region have expressed shock at the passing of their colleague nurse at the War Memorial Hospital in the Kassena-Nankana Municipality.

The 34 year-old nurse (name withheld), until his passing on Friday, January 15, worked at the Paediatric Unit of the Hospital.

Most of the nurses and midwives in the Region took to their various social media platforms to express shock at the passing of their colleague, and expressed condolences to the bereaved family.

Some of them who spoke to the Ghana News Agency (GNA), described his death as sad and attributed the circumstances surrounding the death to “system failure.”

Mr Mark Anthony Azongo, the Head of the Paediatric Unit at the War Memorial Hospital, who expressed condolence to the bereaved family, told the GNA that “The late nurse was energetic, very hardworking and outspoken.

“He was someone I knew as far back as 2013, his death is a big loss to me personally, the hospital, and the entire nurses and midwives fraternity, and the Ghana Health Service in general.”

Mr Azongo, who is also the President of the Nurses and Midwives Specialists Society of Ghana, disclosed that the Paediatric Unit was closed down, while staff were being screened, and urged staff to continue to adhere to the health protocols.

“It is sad that in managing clients, you die out of the virus. We need to take the safety precautions seriously,” Madam Regina Babii, a midwife in Bolgatanga said.

Mr Christopher Saganma Nambileeb, a Paediatric Nurse at the Bawku West District Hospital who also expressed condolence to the family, said “I feel sad and bad because although we are supposed to be caring for victims of the virus are rather the people dying from the virus.”

He said the deceased was his one year senior at the Bolgatanga Nurses Training College (NTC), and a very close friend.

“When he contested for the position of President of the Students Representative Council in school, I was part of his campaign team, so I am greatly affected by his demise.”

Mr Nambileeb said it was important for authorities in the health care system to put measures in place to protect all health professionals, especially nurses and midwives who are at the forefront of the fight against the virus.

“Protective equipment should be available, they should not wait for us to die before they compensate us. If we die, how will we even receive compensation, the system is really disappointing us,” he said.

The Paediatric Nurse further urged his colleagues across all health care facilities to treat every client who visits their facilities as ‘suspects’ and ensure they adhere strictly to the health protocols.

Mr Wisdom Ayinbono Apusiga, a Nursing Officer at the Sandema Hospital in the Builsa North Municipality, said news of the death of the nurse, who happened to be his classmate at NTC, “came as a shock.”

“He was a great guy, you can’t have a boring moment with him and he always had some hard core hilarious information to make you laugh. Due to his nature, he had countless nicknames.

“It is indeed sad and painful to lose such a great personality to COVID-19. May his soul rest peacefully with the Lord,” Mr Apusiga, who was adjudged the Upper East Regional Best nurse for 2020 said.