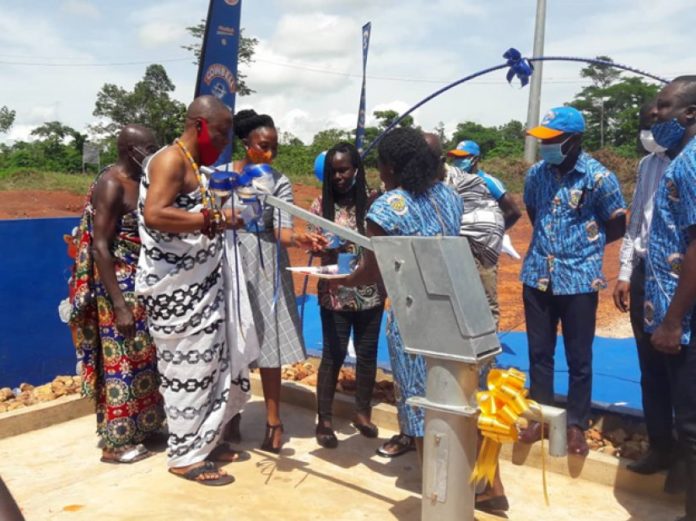 It was a spontaneous joy and happiness when residents and indigenes of Pekyerekye and Freboye in the Bosome-Freho District, witnessed a flow of potable water in their communities for the first time.

The facility was provided by Cowbell Company Limited, as part of activities to mark the 20th anniversary of the company in the country.

The people in the two communities have over the years been sharing creamy water from a pond with cattle and other domestic animals.

According to some of the residents who thronged the site to see the handing over of the water facility and the flow of water in the taps, it was a great relief for them and their families.

They explained that water was a major problem in the two communities for many years, and the opening of the facility would now help them to get clean water for their domestic activities.

“Water had been a big time headache for the people of this two communities, but now, thanks to the Cowbell Company Ltd for their tremendous work. We have clean water now.”

The residents especially, women who had insisted to be part of the handing over ceremony and history, expressed their profound gratitude to the company.

Mr Joseph Eshun, Brand Manager of Cowbell Company, said, the gesture was part of the corporate social responsibility initiatives to assist people in rural communities to have access to potable water to help reduce the incidence of water borne diseases.

He said the company would continue to support the socio-economic development of rural communities to improve their living conditions.

Nana Osei Kwame, Chief of Freboye, on behalf of the people, expressed gratitude to the company and said the gesture would also help to eradicate water borne diseases in the communities.

He called on the Bosome-Freho district assembly to help reshape the deplorable road network in the area to ease the suffering of farmers in transporting their farm produce to the market centres.