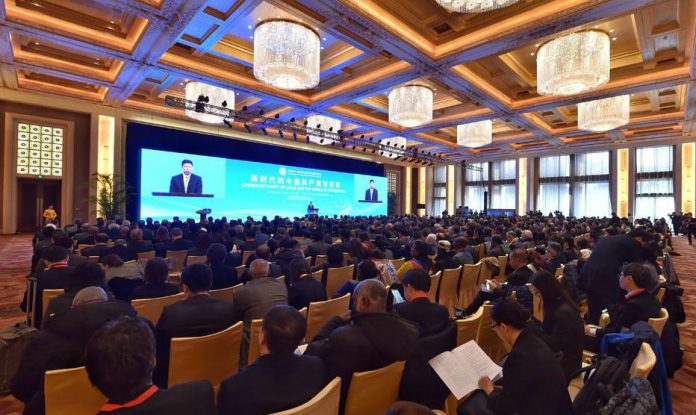 “Reviewing the development and changes of China, which I personally witnessed, is like watching a documentary. Every stage and scene are astonishing,” said Dogu Perincek, chairman of Turkey’s Patriotic Party in a recent interview with People’s Daily.

The Turkish politician, who has made 13 visits to China during the past four decades, said the 100-year history of the Communist Party of China (CPC) is a splendid history of heroic stories and legends.

He noted that the epic jointly written by the CPC and the Chinese people has explored a development path from which the human society can draw wisdom from, and set an example for global political parties.

Perincek is a renowned Turkish politician. In 1978, he co-founded the Workers’ and Peasants’ Party of Turkey and then served as a high-ranking official of the Socialist Party and the Workers’ Party of Turkey in the following days. Six years ago, he took up the post as the chairman of the Patriotic Party, which has maintained long-term friendly exchanges with the CPC.

According to him, the book “Xi Jinping: The Governance of China” is placed at a conspicuous position in the library of the Patriotic Party.

“I’ve read through it. The book creatively answers a series of important questions concerning the development of China and the world in the present age, and presents the advanced governance experiences of the CPC to the world,” Perincek said.

The CPC has a firm resolution and capability to lead the Chinese people to build the socialism with Chinese characteristics, he said, adding that there is no precedent of such undertaking, and the CPC must learn through its practices.

The CPC has always started from China’s realities, and been solving the problems it encounters in an innovative manner, which is a valuable treasure, he said.

“The CPC has a bright future. It has offered very important development experiences for the human society,” he told People’s Daily.

In recent years, Perincek has been introducing his visits to China, as well as his profound understanding of the country’s development path, on a special column he has established on local newspaper Aydinlik. To respond to the lies related to China’s Xinjiang Uygur autonomous region fabricated by some Western media outlets and politicians, he would introduce what he saw and felt there and sends his voice out through multiple channels.

“Xinjiang has made huge achievements, not only in economic and social development. I saw local cultures well protected when I visited the autonomous regions’ Turpan, Kashgar and Ili. Apart from mandarin, minority languages are also taught there,” he said.

He also hailed the outstanding outcomes of Xinjiang’s fight against terrorism and extremism. Calling terrorism a common enemy of all human beings, he said the international society needs to reinforce cooperation and jointly fight it.

Facing the sudden coronavirus pandemic, the Chinese people united together, and controlled the virus within a short period of Time and achieved rapid economic recovery. Perincek praised China’s epidemic control effects, saying the fight against the virus mirrored the CPC’s governance philosophy and capability.

The CPC has always placed people’s lives and health at the first place, which is crucial for the country to win the fight, he said, adding that China has also made remarkable contributions to international anti-pandemic cooperation by its timely assistance for relevant countries.

China’s poverty reduction is a sector that particularly attracts Perincek’s attention. He said it is a great historic achievement of human development for a country with 1.4 billion people to get rid of poverty. It not only contributes to global poverty reduction, but also ignites a hope for poverty alleviation for all mankind, he added.

During the interview, the Turkish politician recalled his attendance to the CPC in Dialogue with World Political Parties High-level Meeting in Beijing four years ago. At the opening ceremony of the meeting, Xi Jinping, general secretary of the CPC and Chinese President, delivered a keynote speech, in which he stressed that all the political parties should move with the tide of the times, gain a keen appreciation of the underlying trend of human progress, and meet people’s common aspirations. They should also aim high and look far, and fulfill their responsibilities, Xi added.

Xi also noted that the destiny and future of each and every nation and country are interlocked, and political parties play an important role in the progress of human civilization. “What he said was of historic significance,” Perincek said.

“As a political party that has the highest number of members in the world, the CPC never forces its positions on other political parties. On the contrary, it encourages them to select their own paths according to their national conditions. That’s an important enlightenment we acquired from our exchanges with the CPC,” Perincek said.

To drive progress of human civilization with sci-tech innovation