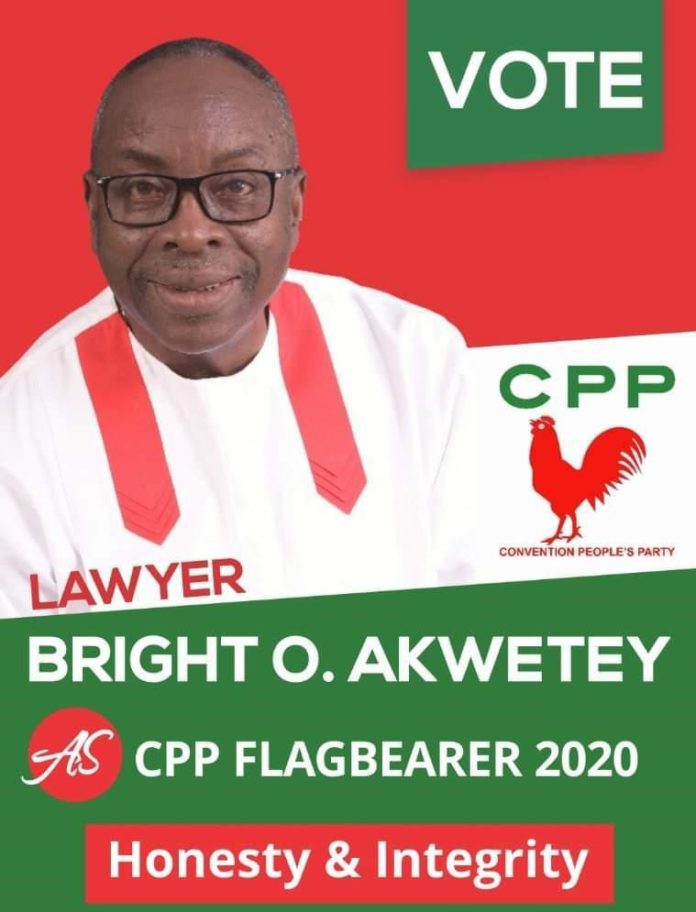 A Convention People’s Party (CPP) government is determined to create a progressive society, where basic needs of life are readily available for the ordinary Ghanaian citizen, Mr. Bright Akwetey, a leading member of the party has announced.

Mr Bright Akwetey who is contesting the flagbearer position to lead the party in the Election 2020 emphasised that clothing, shelter, food, education and employment were basic necessities and elements of life that no progressive government should deny ordinary Ghanaians.

In an interview with the Ghana News Agency (GNA) in Sunyani, Mr. Akwetey who had contested for the CPP’s flagbearer slot for the fourth time said already the CPP had identified, and its government would revive all the defunct factories, established by Dr. Kwame Nkrumah, Ghana’s first President to bring hope to the people.

Earlier, he addressed party delegates and supporters drawn from the constituencies in the Bono Region at a meeting held in Sunyani to canvass for votes in the party’s forthcoming congress.

“CPP is always proud because the party gained independence for Ghana. This is the highest achievement made so far in the history of our beloved country. A new CPP government will ensure that this independence is reflected in all aspects of socio-economic livelihoods of Ghanaians without discrimination”, he said

“Colonialism and imperialism are in full operation in Ghana. This is because the nation has not been economically liberated from the shackles of neo-colonialism”, Mr. Akwetey indicated, stressing “we urgently need to educate Ghanaians for them to understand they can manage their own affairs and create progressive society.

“My brother I can tell you that Ghana is down and is struggling economically because CPP is down. If the CPP which brought independence in Ghana doesn’t rise again, then Ghana will not rise as well. So, we have the utmost responsibility to revive the CPP, and by extension revive the flagging economy of Ghana”, he added.

He urged the delegates of the CPP’s forthcoming congress to elect him as the flagbearer in the supreme interest of the party.

This, he explained would enable him to secure an overwhelming victory for the CPP to form the next government, and help alleviate the socio-economic plight of Ghanaians.

A CPP government, led by him, Mr. Akwetey indicated, held the key to advancing the socio-economic growth and development of the nation.

He therefore called on Ghanaians to ignore the New Patriotic Party (NPP) and the National Democratic Congress (NDC), and give the CPP a chance to govern the nation again in the December 7, Presidential and Parliamentary elections by voting for the party to make life better for them.