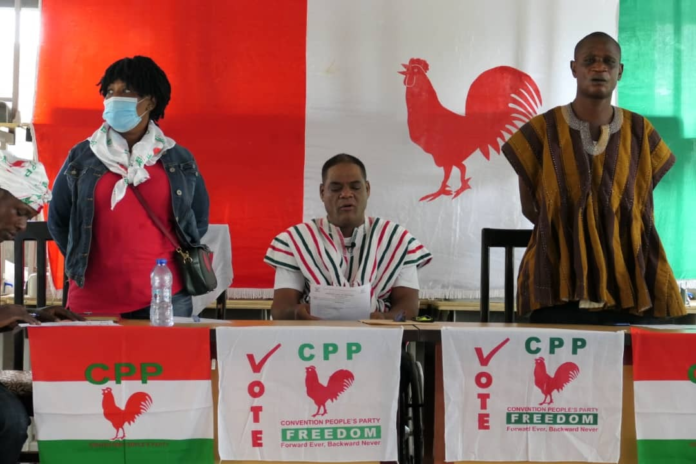 Mr. Ivor Kobina Greenstreet, Flag bearer of Convention People’s Party (CPP) has said the party was ready and well equipped to rescue the country from the diabolic grasp of the two major parties.

He said both the New Patriotic Party (NPP) and the National Democratic Congress (NDC) governed the country since 1992 with nothing to show in terms of alleviating the plight of the ordinary citizen.

Speaking at a symposium organised by the Party to commemorate Dr. Kwame Nkrumah’s birthday on theme “Kwame Nkrumah Yesterday, Today and Tomorrow” in Kpando, Mr. Greenstreet said both parties had failed to utilise the available vast natural resources the country was blessed with to benefit Ghanaians.

Mr Greenstreet added that Dr. Nkrumah believed in the Ghanaian dream that created a just society, where everyone had fair and equal opportunities to succeed in their various chosen endeavours and that was what the CPP stood for.

“We must create a just society, where everyone has a fair and equal chance of success and make the sky the limit for those, who want to change their destiny.”

He said “Nkrumah had always stood heads above all those, who were in the movement for independence and his Party, the CPP was perhaps the most successful party in this country that it was necessary to ban it and to clip the wings of the Big Red Cockerel.”

“As we mark his birthday, let me remind you that we the CPP are ready to take over the mantle of government so remember that a vote for CPP is a vote for yourself”, Mr. Greenstreet told the gathering.

He said it was ”only the CPP that could relaunch the country into the fourth industrial age and coupled with the precipice of technology that would continue to transform the way we live, work and interact.”

Madam Nana Yaa Jantuah, General Secretary of CPP said it was mischievous that one would try to distort history by insisting that Dr. Kwame Nkrumah was not the founder of Ghana.

“We all know that Nkrumah founded Ghana on 6th March, 1957” she added. Madam Jantuah said the fortunes of the country could be turned around for the better, if the CPP was voted into power come December 7 and it would require hardwork and determination from party members.

She called on all party members to evangelise for the party by adopting the door-to-door campaign approaches.
She said the CPP had no division and that the party was stronger and together now than ever, adding that all members were solidly behind the flagbearer.

Mr. Blaise Edem Ametepey, CPP Parliamentary Candidate, Keta Constituency said the NDC and NPP had ruled the country for 28 years and together had failed Ghanaians.

He said ”all party members and faithful should make sacrifices as freedom doesn’t come easily.”
“A vote for the CPP is a vote for yourself, but any other vote is a wasted vote. Let us be wise,” Mr. Ametepey said.

“Let us get out there and give hope to our families and friends. This is solidarity. This is a clear matter of solidarity. Yes we can win if we do our homework smartly and wisely,” he added.