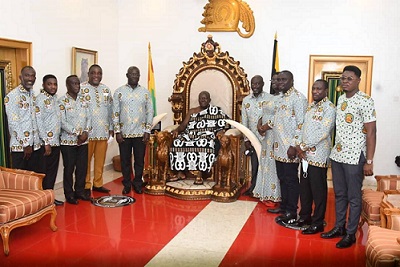 He also called on the Management of the Authority to ensure strict adherence to Pension Funds Investment Guidelines not only to help provide satisfactory returns, but importantly to safeguard contributions by workers in the country.

The Asantehene said when Pension Funds were well managed, it could be a stable and reliable source of funding for national development as practice elsewhere around the globe.

An official statement copied the GNA, said the Asantehene made the call when the Management of the NPRA called on him at Manhyia Palace in Kumasi.

The visit to the Manhyia Palace was to brief the King on the activities of the Authority and to announce to him the observance of the first-ever National Pensions Awareness Week to be held in the last week in October.

Otumfuo Osei Tutu urged the NPRA to monitor and supervise pension Institutions properly and to ensure that they worked with pension funds within the regulations to avoid any malfeasance and unworthy investment.

He said he was aware of the practical guidelines the Authority gave to guide pension fund investments to ensure well-defined standards aimed at achieving safety of assets and fair returns on the pension funds and commended the Management of the Authority.

“Such guidelines will also help to provide contributors with a range of investment options and ensure that Trustees and Fund Managers make sound investment decisions.

He said the country had entrusted the future and the destiny of the Ghanaian worker in the hands of Management of the Authority and their entire staff and therefore must work towards realising the goals and justify the trust reposed in them.

He expressed satisfaction in the skills and the ability of Management, some of whom he acknowledged he had known personally.

“You cannot fail the workers of this country. Your abilities and knowledge in the area must be well exhibited in providing a decent retirement package for the Ghanaian worker upon retirement.

He called on the NPRA to strengthen their sensitisation and education to cover countrywide for the populace to understand the urgent need to participate in pension matters.

The Chief Executive Officer of the Authority, Mr Hayford Attah-Krufi, said the Authority has embarked on a massive educational drive to help drum home the nation’s pension agenda.

To this end, he noted, the NPRA has opened two more offices within the last two years and is ready to open another one at Tema soon.

He said Management acknowledged the pension industry’s enormous task, but his team is well poised in working to have a better pension structure in the country.

He expressed his gratitude to the Asantehene for his admonition and pledged to abide by them for the benefit of the Ghanaian worker.