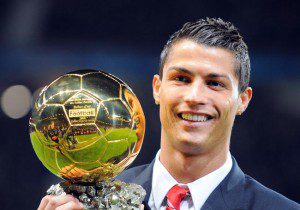 Real Madrid forward Cristiano Ronaldo may disappoint his admirers after his career after hinting that he will not go into coaching but will love to live like a KING.

Ronaldo, 30, insists he is not thinking about taking on a coaching role when his time in the limelight comes to an end.

“There is another life after football,” he said in an interview with Papel.

“I think at first it will be tough [not playing], but if you ask me now if I want to coach, I would say no – neither as a club manager nor a president.

“You can say you have the best job, money, cars, houses… but that is not everything.

“One example: On Saturday there’s boxing on in Las Vegas and I would like to take my family and friends, but I can’t because I have no time. But after [football] I want to live like a king.”

The forward reveals that playing football since age 11 has taken him away from his family and friends and will like to enjoy himself and stay away from the game after hanging his boots.

Ronaldo added that he doesn’t feel the weight of the expectation on his shoulders after a decade of battling for the Ballon d’Or with Barcelona wizard Lionel Messi, or the constant speculation about his life.

“I can handle the pressure due to the hard life I’ve had,” he continued.

“Leaving home at 11 and going into a different world, first to Lisbon and then to Manchester, was very difficult and between 11 and 18 I [learned about] stability.

“So I’ve become the person I am today because of the time I spent without my family and going through difficult times.

“I was a teenager, but I had to do things as a man – to the point that I had to do my own ironing. My mental strength began at that time.”

Ronaldo also dismissed the idea that other people’s opinions worried him.

He added: “Everyone can think what they want. I go to bed each day with a clear conscience and I sleep well.

“We cannot be obsessed with what other people think of us – even God didn’t please everyone.”