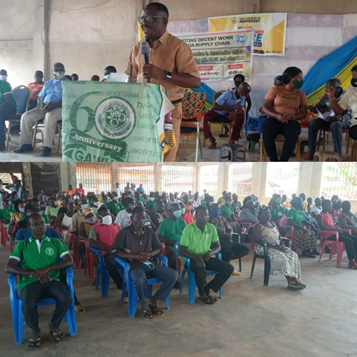 This, he said, was critical to ensure a healthy environment and safe food for consumers as pertained to cabbage production.

A statement issued by the CSIR-CRI Public Relations Section and copied to the Ghana News Agency (GNA), Kumasi, said the advice was given during a field visit to some research-extension-farmer trial sites in the Bosome Freho and Amansie Central Districts of the Ashanti Region.

It was organized under the Modernizing Agriculture in Ghana (MAG) Programme and had on board a team of research scientists from the Institute and Extension Officers drawn from the Department of Agriculture.

The statement said the objective was to observe and assess the efficacy of some laboratory-tested insecticides (both bio and synthetic) and fungicides on the management of diamondback moth (DBM) and leaf blight on cabbage.

Diamondback moth is an insect that attacks the cabbage head and destroys the crop, thereby affecting the growth, yield and marketability of the crop.

The leaf blight is also a disease that affects the cabbage crop, turning the leaves from green to yellow, then brown and ultimately, reducing the suitability of cabbage head as food.

According to the statement, the visit was also to assess the farmers’ knowledge and practices on pest and disease management in cabbage production over the years.

Most farmers in the two districts are into cabbage production, and the problem of diamondback moth and leaf blight infestations on the crop is having a devastating effect on the yield of the crop and incomes of farmers.

The statement, providing a concept note, said over the years, farmers had desperately been using different agrochemicals and combinations of insecticides and fungicides, but to no avail.

This has led to pests showing resistance, a situation resulting in a devastating effect on the yield of the crop and incomes of the farmers.

The statement emphasized that some insecticides and fungicides, therefore, were assessed in the laboratory for their bio-efficacy against the diamondback moth and cabbage leaf blight, respectively.

Five bio- and five synthetic insecticides were subsequently selected for a field verification trial at Adeito in the Bosome Freho District.

According to the statement, a lower scale verification trial comprising three each of bio- and synthetic insecticides were used at Hemang in the Amansie Central District, adding that all trial sites had three fungicides.

“The team observed that most of the bio-insecticides and all the fungicides were doing well in managing the DBM and leaf blight, respectively.

“The resultant effect was that there was a low infestation of the pest and disease on the crop, leading to better and more vigorous growth and yields,” the statement noted.

It affirmed that the CSIR-CRI would continue to partner the Ministry of Food and Agriculture and other agencies as well as farmers, to ensure the realization of the government’s objectives of achieving improved livelihoods for all Ghanaians.