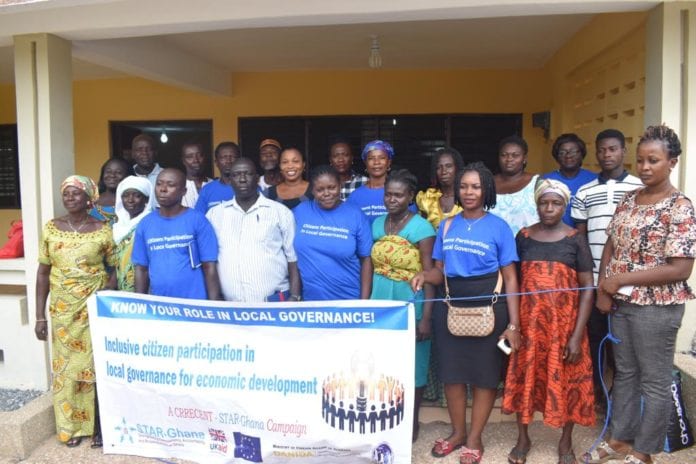 A quarterly review meeting to wrap up the second quarter activities of Child Resource and Research Centre (CRRECENT) in the Okere and Akuapem North Municipal Assemblies was held at Adukrom in the Eastern Region.

The review was part of activities being carried out by CRRECENT in collaboration with Star Ghana Foundation with support from the UKAid, DANIDA and the European Union.

Participants were drawn from the Departments of Agriculture, Social Welfare, Information Services, Planning, DOVVSU of both Akuapem North and Okere districts as well as CRRECENT Child Protective Teams.

The review focused on progress made so far on the advocacy on “Inclusive citizen participation in local governance for economic development” with an overall outcome of “empowering women and socially excluded groups to enable them access economic opportunities through active engagement with local government”.

Representatives from the 12 project communities, Amanokrom, Mamfe, Dawu, Awukugua, Nsutam, Onyame Bekyere, Kwamoso, Baware, Abenawia, Abenta, Gbolu Kofi and Teiko took turns to talk about the project impact on their communities
According to Madam Phyllis Buakyi, the Awukugua rep, majority of the adults in her community have gained the understanding that it is important to listen to children so they can influence and guide them.

Children are therefore now allowed to make significant contributions during community gatherings and they are also able to discuss issues with their parents and guardians and that through the Mentorship programme the personal hygiene of the youth have improved considerably.

In Kwamoso, the youth are demanding for accountability from the Assembly man which has brought about a change in the way he works making him more proactive and able to rally community members for such activities as communal labour.

They have also been able to contact the DCE in connection with the Planting for Food and Jobs policy and are due to see him again to discuss the distribution of portions of land ploughed for the initiative.

The youth have also been very helpful in ensuring girls abide by community bye-laws of having all children off the streets and at home studying by 7pm.

In Onyame Bekyere, the mentorship programme has made a number of girls change their mind and attitude towards school with some of them getting into school in the SHS second track stream. Four of them are receiving sponsorship from mentors.

It has indeed brought such conspicuous positive change in the mentees many more girls want to sign-on as mentees.

Acording to the rep from Mamfe, adults in his community have resolved to be more responsible for the children and with their consensus the Chief has ordered the arrest of children found on the streets after 8pm. This is now on-going with the support of the Police.

The Youth Parliament (YP) formed as a result of sensitisation on local governance by this project was introduced to the community during the Akwasi dae.

The Youth Parliament is very active in keeping the Assembly members on their toes.

In Gbolu Kofi, as a result of the project, one “Okada” rider has been arrested for constantly disregarding the advice of community leaders to stop befriending a young girl and having sexual affair with her.

In effect, many young guys are restraining from sexual promiscuity for fear of being arrested.

During further interactions, Communities were advised to form Farmer-Based Organisations to facilitate the distribution of seeds, fertiliser and Extension services.

There is a request for an extension of the mentoring training to all the children in project communities.

Information Services have reiterated their availability for individual community calls to cover programmes
The Assemblyman present from Onyamebekyere, Mr. Emmanuel Tagbolo reported that the new-found knowledge on citizen rights to be fulfilled by the Assembly representatives was being misused in certain quarters.

He pleaded for sensitisation for communities on how to demand accountability from their Assembly representatives without being unduly confrontational Communities were then asked to indicate days they consider most convenient for project visits from CRRECENT.

The chairperson, Queen Mother of Onyame Bekyere, Madam Comfort Akrofi congratulated all on the efforts so far made and the ensuing impact.

She encouraged all to continue working hard for the benefit of their people since change takes time to evolve.

She called for more education on the mentorship programme for parents to fully understand and willingly release their daughters for the meetings.

Project Manager and Communications Lead at CRRECENT, Mrs. Efua Chidi said it was about time the gap is narrowed between the ruled and the rulers’ vis-à-vis local governance.

She said this would give the ruled the impetus to make reform contributions in economic development in various communities.

She was of the view that most often people think decision making is the reserve of politicians and public sector workers.

Stressing that all and sundry needs to know that local governance includes all namely farmers, artisans, hairdressers, dressmakers, disability groups among others.

She advised the youth not to shun away from agriculture and that it could be one of the easiest ways to develop themselves.

She explained that with proper advice and requisite expertise from Agriculture Extension Officers, the youth could create job opportunities for themselves as well as earned foreign exchange through farming.

She challenged community members to inculcate the habit of inviting Member of Parliaments and government functionaries to their activities and not wait for electioneering periods before doing so.

At the end of the programme, CRRECENT Child Protective Teams (CCPT) at the various communities were allotted few minutes to review the activities at their various end.