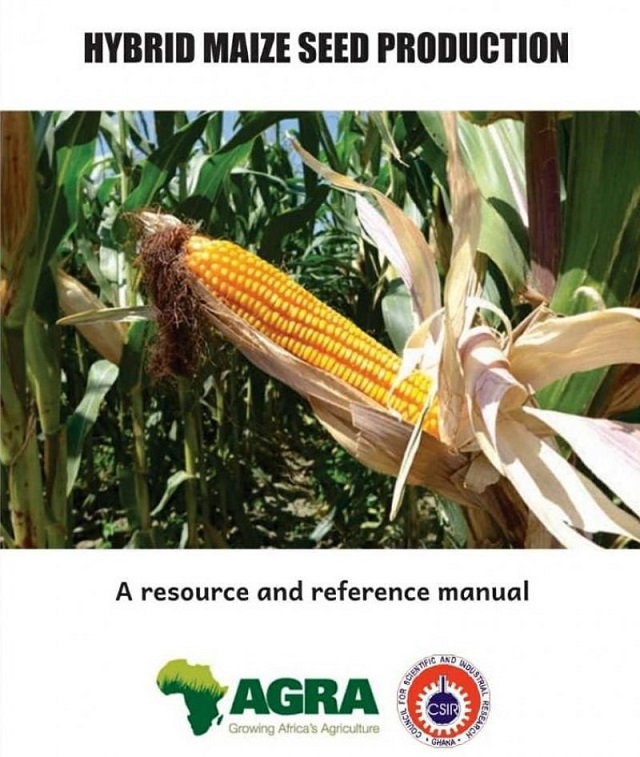 The Council for Scientific and Industrial Research has developed a Manual on hybrid maize seed production to equip seed growers with the requisite skills and resource to efficiently produce the desired quality and quantity required by farmers.

It could be used by agriculture extension agents, farmers, students and end-users, who want an education in hybrid maize seed production in the different agro-ecological zones of the country.

The Manual was launched at the Agricultural Input Fair and Stakeholder Sensitisation event held in Sunyani and attended by actors in the agricultural value chain to interact and network.

Hybrid maize production in the country has not attracted the expected patronage from farmers, and to catalyse widespread adoption and cultivation of hybrid maize varieties, the Planting for Food and Jobs programme (PFJ) is strategically promoting the use of hybrid maize to enhance farmers’ yields.

Hybrid maize technology is believed to be a prime driver for the entire seed industry and generally, the higher yield potential of hybrids over open-pollinated maize varieties (OPVs) increases the productivity of farmers.

The premium price of hybrid seed and the need for farmers to renew their seed each season keeps the private seed sector vibrant.

However, the Government relies heavily on importation of hybrid seeds for its programmes, partly due to the inability of the local seed systems to produce sufficient quantities for farmers.

One of the major constraints affecting the successful expansion of hybrid maize seed production in the country is the limited number of trained and experienced personnel with the requisite knowledge and skills in hybrid seed production.

This necessitated the development of the Manual to transform the sector.

Mr Seth Osei Akoto, Director of Crop Services at the Ministry of Food and Agriculture, who spoke during the launch of the Manual at the Fair in Sunyani, said in the implementation of the PFJ, the country experienced challenges of acquiring hybrid seeds even though it was obvious the hybrid seeds were more productive than OPVs.

Mr Akoto said the country had to rely on the importation of hybrid seeds to satisfy the number of farmers under the PFJ.

He, therefore, was delighted that CSIR-SARI and CSIR-CRI had taken the initiative to develop the Manual, which would go a long way in equipping seed producers with the required knowledge and expertise to produce high quality hybrid seeds for the growing number of farmers on the PFJ.

Dr Gloria Boakyewaa Adu, a Maize Breeder at CSIR-SARI, who was one of the authors of the Manual, expressed gratitude to Alliance for a Green Revolution in Africa through the Smallholder Inclusive Productivity (SIPMA) and Market Access for Maize-Soybean Value Chain in selected districts of Bono and Northern Regions project for providing the financial support for the development of the Manual.

Dr Adu also acknowledged the contributions of the SIPMA partners and the various technicians from CSIR-SARI and CSIR-CRI, who in diverse ways, helped to make the manual come out in the best form.