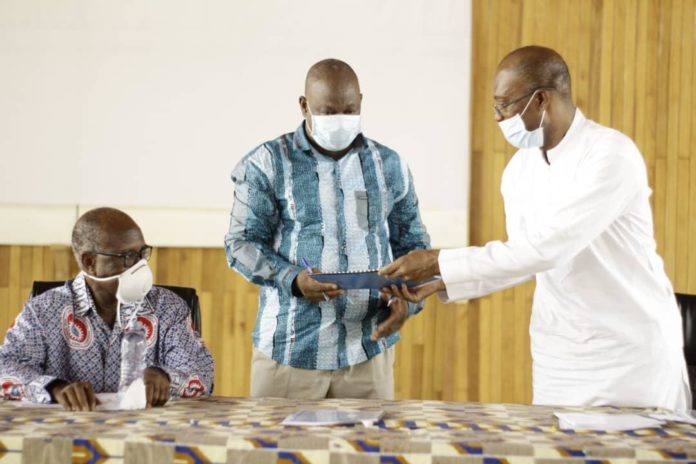 Dr Buah’s appointment was announced in a speech read on behalf of the Director-General of the CSIR, Professor Victor Kwame Agyeman, during a ceremony at Nyankpala on Tuesday for the immediate past Director of the CSIR-SARI, Dr Stephen Nutsugah, to hand over to the acting director following his retirement from the Institute.

Professor Agyeman said Dr Buah would remain in an acting position until a substantive Director was appointed to head the Institute.

Dr Buah is a Crop Physiologist and received his Doctorate Degree in Soil Fertility and Plant Nutrition from the Iowa State University, United States, and is also the immediate past Head of Upper West Region Farming System Research Group of CSIR-SARI.

Professor Agyeman congratulated Dr Nutsugah for his good work and immense contribution towards the advancement of the Institute, saying during his tenure, the internally generated funds of the Institute increased, the number of donor funded projects also increased and the CSIR-SARI was always among the top five of the 13 CSIR Institutes in the yearly rankings.

Dr Nutsugah was offered an appointment by CSIR-SARI on February 01, 1994 as a Research Scientist, and he set up the Plant Pathology Section and also served as the first resident Plant Pathologist of the Institute.

This Laboratory was not only the first at the Institute but also the first in the then Northern Region and also served as a training ground for students of the University for Development Studies (UDS).

Dr Nutsugah’s first brush with leadership at the Institute began as the Head of the Plant Pathology Section, rising to the status of Deputy Director in 2007, Acting Director in 2008, and eventually as the substantive Director from 2010.

Not only did Dr Nutsugah help establish the Plant Pathology Section at UDS, but he also helped raise the next generation of plant pathologists as a part time Lecturer. Some of those students often visited the CSIR-SARI for their students practical and dissertation work and even attachment.

Dr Nutsugah obtained his first degree in Agriculture (Crop Science option) from the University of Ghana in 1985. Following his National Service, he proceeded to Japan where he pursued and successfully completed a Master of Philosophy (MPhil) in Plant Pathology from the Tottori University in 1990.

He followed it up with a PhD in Plant Pathology from the same University and successfully completed in 1993.

Dr Nutsugah, in his farewell address during the handing over ceremony, mentioned some of the achievements during his tenure, which included the establishment of a three-hectare mango museum with 21 exotic varieties of mangoes to be used in tree crop research, and the considerable improvement of staffing at the Institute with 40 staff members currently in school and 70 at post giving a good outlook of the human resource base for the future.

He urged staff to hold fast to the core values of the Institute, which included discipline, dedication, reliability, transparency, team work, mutual respect, professionalism and selflessness, adding that they were necessary to guide the decisions, actions and relationships as CSIR-SARI worked towards fulfilling its mission.