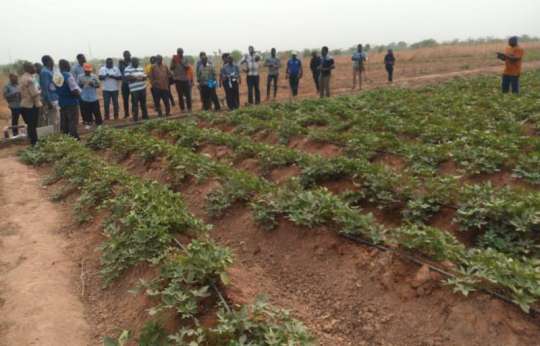 Four new varieties of sweet potato have been developed for cultivation and consumption to boost nutritional status of the citizenry whilst ensuring food security and improved income for farmers.

They have been developed by the Savanna Agricultural Research Institute of the Council for Scientific and Industrial Research (CSIR-SARI) in collaboration with the International Potato Center (CIP), a non-profit international organization, focusing on roots and tubers research development.

Members of the National Varietal Release and Registration Committee (NVRRC) of the Ministry of Food and Agriculture (MoFA), who inspected the field trials of the new sweet potato varieties at Nyankpala on Tuesday, were impressed at their development.

They, therefore, approved the new varieties to be recommended to the Minister for Food and Agriculture to sanction the formal approval and release of the new varieties in line with the law to allow for their cultivation and consumption in the country.

Professor Johnathan Padi Tetteh, a Member of NVRRC of MoFA, speaking after inspecting the field trials of the varieties, commended CSIR-SARI for its efforts at achieving food security and reducing poverty in the country.

Professor Padi Tetteh urged CSIR-SARI to review and provide a valid documentation on the four sweet potato varieties and submit it to the NVRRC of MoFA as early as possible to be sent to the National Seed Council.

Dr Tom van Mourik, CIP Country Manager, Ghana, expressed gratitude to members of NVRRC of MoFA for their positive response and assured them that the documentation would be made available to them as soon as possible.

Dr Joseph Adjebeng-Danquah, a Plant Breeder at CSIR-SARI, highlighting the characteristics of the new sweet potato varieties, said CSIR-SARI had been examining the new varieties against four other high yielding varieties in multi-locations (Nyankpala, Bawku, Wa, Navrongo, and Tumu) from 2017 to 2019.

He said the PGA14008-9, a pale orange-fleshed genotype, had an average and maximum yield of about 17 and 35 tonnes per hector (t/ha) of fresh roots and contains many marketable size storage roots per plant and weevil tolerant.

He said the PGA14011-43 was an orange-fleshed genotype with vigorous vine growth and large root size and produce up to 31.9 t/ha in three months.

“Also, PGA14372-3 has high desirable low sweet taste to meet consumer preference for staples whereas PGA14398-4 has sufficient level of beta-carotene, a key micronutrient for children and women” he said.

He said CSIR-SARI had also put in place measures to ensure multiplication of the four new varieties as well as making them available to farmers and other actors in the food chain.