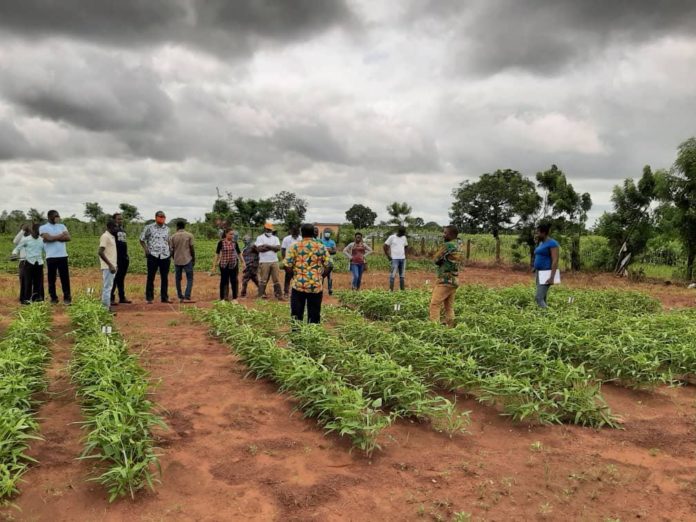 Scientists working on the Pod Borer Resistant Cowpea (PBR Cowpea) variety at the Council for Scientific and Industrial Research – Savanna Agricultural Research Institute (CSIR-SARI), have been commended for sticking to the confined field trial protocols issued by the National Biosafety Authority to ensure safety.

Dr Nicholas Denwar, Chairman of the Institutional Biosafety Committee (IBC), gave the commendation during the annual visit to the confined field trials of the PBR Cowpea at Nyankpala to observe the research activities.

Dr Denwar said that it was important that the Scientists adhered to the rules and protocols governing the research to ensure that it met both national and international standards.

Dr Jerry Nboyine, Principal Investigator on the PBR Cowpea project, took time to explain some of the basic protocols to the visiting committee members, including the security steps that must be followed to conform to the biosafety rules of the country.

One of the rules is that no one was allowed to take anything from the field outside the fence, and anything that is no more in use on the field is incinerated immediately.

Dr Nboyine said the essence of the confined field trial was to develop a cowpea variety that was resistant to the legume pod borer, Maruca vitrata.

He said the pest was one of the most destructive in cowpea production and was capable of causing yield loss of up to 80 per cent if unchecked, adding “Farmers, therefore, resort to the chemical spray of up to eight to 10 times to control it.”

Mrs Gloria Adazebra, the breeder in-charge of the confined field trials, informed the IBC that the project was initiated due to the severe economic damage the Maruca pest was causing cowpea farmers and indicated that conventional means of breeding could not solve their attacks on the crop.

Mrs Adazebra mentioned that several attempts were made to control the devastation with pesticides and to also try to locate cowpea varieties with resistance.

However, all these were done without success and expressed the delight that a protein from biotechnology cowpea could help the local cowpea varieties to resist the Maruca pest.

She said research activities were run to ascertain the safety and its effectiveness in controlling the pest, adding that after several years of evaluating how effective it was in resisting the pest in Burkina Faso and Nigeria, it was brought to Ghana for further trials.

She said, “In Ghana, the trials have been ongoing for more than five years, running tests of several parameters including environmental safety, the effect of the gene on beneficial insects such as bees, and the effectiveness of the gene in controlling the Maruca pest all came out successful.”

She emphasised that the gene was being transferred by conventional breeding by crossing the local varieties with a preexisting variety that had the gene incorporated in it.