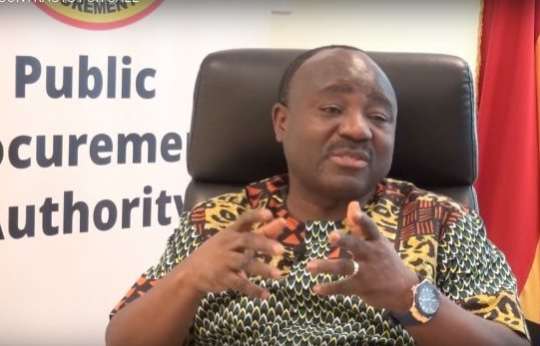 According to the coalition in a release copied to News Ghana, “The documentary portrayed shocking revelations about the conduct of the principal regulator of the public procurement regime in Ghana, the potential extensive abuse of the entire public procurement chain and dissipation of public resources.”

The release also said, “As per Section 38(1) of the Public Procurement Act 2003 (Act 663) as amended Act 2016 (Act 914), restricted tender can be undertaken only under the following circumstances;
a.Specialized and complex procurement
b.Cost and time of the process and the cost of the project are not commensurate
c.Lack of response from a competitive process
Sadly, the restricted tender approved contracts mentioned in the documentary do not fall within any of the above conditions; a clear violation of the Act.”

“To demonstrate real commitment by President Nana Akuffo Addo and his government to the fight against corruption, CSOs working against corruption are calling on his high office to;
1. Further suspend the entire Board of the PPA pending investigations from the OSP and CHRAJ. The Board cannot be left blameless in this whole contracting saga as revelations made in the said documentary raises serious concerns about the Board’s understanding of the Conflict of Interest injunction imposed by Article 284 of the 1992 Constitution and how to manage it.

Additionally, the Board’s oversight or possible complicity in the possible abuse of the restricted tendering rules requires them to step aside for a thorough investigation to be completed

2.Suspend the use of restricted tendering and single source processes while investigations are underway

3.Instruct all other investigative bodies not to initiate or trigger any parallel investigations to the OSP-CHRAJ probe

The Coalition has also taken note of an on-going collaboration between the Audit Service and the Office of the Special Prosecutor related to some of the contracts mentioned in the documentary. We commend the Auditor General and the OSP for swiftness and call on them to direct their resources to investigating all contracts awarded using any other methods other than competitive tendering under the stewardship of the current Board and Mr A.B Adjei.

We are also of the view that personnel of the various Ministries, Departments and Agencies (MDAs) may be complicit in a possible grand scheme to corrupt the public procurement system. The CSO Coalition further calls the OSP and Audit Service to extend their investigations to MDAs where restricted tenders and single sourced contracts may have been fixed in favour of companies linked to personnel of the MDAs.

Also, the investigative bodies should as a matter of urgency consider the monitoring of the assets and accounts of individuals implicated to ensure the State is able to recover any monies appropriated illegally.

Even though CSOs recognize the prompt action of government on the matter, we encourage the President and government to go the full nine (9) yards with this case as recent history of investigations into alleged corrupt conducts of high-profile government appointees have not yielded encouraging outcomes as far as the fight against corruption is concerned.

The Coalition of CSOs expect that, government will investigate this case thoroughly, prosecute where necessary and sanction all those who will be found culpable while any resources lost to this venture is retrieved.

The Coalition will monitor closely the efforts of all agencies involved to ensure justice is served.”