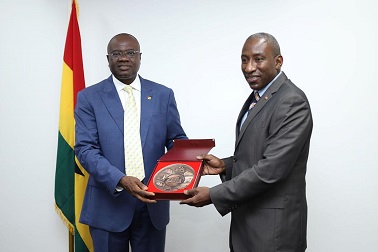 He mentioned the rich Ghana Cuba relations, which started in the 1950s, and called for its further strengthening for the mutual benefit of both countries.

The Deputy Minister congratulated Mr Gonzalez on the great strides made during his tour of duty.

He recalled the longstanding cordial relations between Ghana and Cuba dating back to Ghana’s independence and said the past few years had witnessed the further strengthening of those ties.

Mr Ampratwum-Sarpong expressed the hope that Ghana-Cuba relations would continue to flourish on all fronts for the mutual benefit of the two countries.

He commended the outgoing Ambassador for his hard work during his tenure and referred to the assistance offered by the Cuban Embassy and the relevant authorities during official visits of President Nana Akufo-Addo and his Vice, the Foreign Minister and other high ranking Ghana Government officials to Cuba.

With regard to the bilateral cooperation, Mr Ampratwum-Sarpong commended the Ambassador for his role in facilitating the successful enrolment of almost 300 students to study medicine in Cuba within the framework of two academic services agreements with sponsorship from the Ghana National Petroleum Corporation (GNPC) Foundation and Ghana Scholarships Secretariat.

He hailed the efforts of Mr Gonzalez in liaising with government officials in other Ministries, Departments and Agencies (MDAs), especially the Ministries of Health and Education, to identify and explore areas of bilateral cooperation.

The Deputy Minister expressed government’s commitment to extend the same cooperation to the in-coming Cuban envoy to build on the remarkable achievements of Mr Gonzalez in enhancing the relations between Ghana and Cuba.